It's Official! Beyonce Buys SMIG's Racecar. The SMIG Travels Back To the Future With a Real M3!!

Rumors that SMIG's hugely popular racecar has been sold have just been confirmed. Our site had earlier reported that the car was only undergoing a Beyonce to Taylor Swift conversion here. It is not presently known if the new owner will retain the triple exhaust trunk routing configuration or the single exhaust configuration reported earlier here.
The SMIG has swiftly moved on to purchase Will Turner's personal 1988 E30 M3, which has won at Lime Rock Park, Pocono, Watkins Glen, New Hampshire, New Jersey, VIR, and Mont Tremblant and has finished 1st in 95% of its race starts. 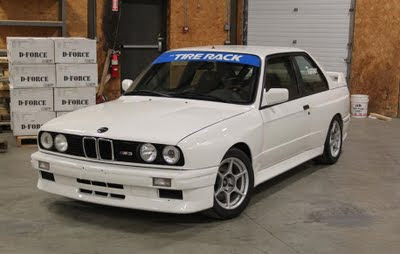 Reports of desperation followed by depression from the news among other BMW CCA J stock competitors are not exaggerated. On a related note, these are the Top 100 songs of the car's model year. SMIG is reportedly still torn between Whitney Houston and Richard Marx for his pre-race routine.
Posted by CT at 11:58 PM