Spotted: Ferrari FXX. Fastest Production Car In the World Around a Racetrack!!

This is one of only 30 Ferrari FXX ever made and it sat right in front of me on pit road at a recent track weekend at Tremblant, Canada. 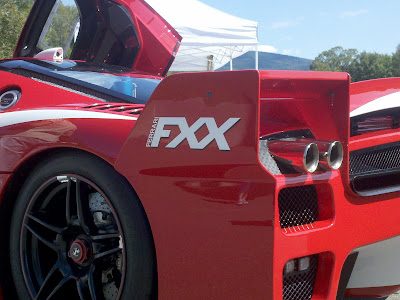 It had a crew of two mechanics standing nearby, periodically checking the torque in the center lug nut on each wheel and keeping the car spotless, so it would be ready for its owner. You have to be on a very exclusive list of Ferrari owners to be allowed to purchase the FXX for approximately $2,000,000. However, since it is technically a development car, you still have to keep the FXX at a dealership, maintain it at the factory, and make arrangements with the dealer each time you need to have the car shipped to your next track event.

Of the 30 FXX ever built, there are only 3 that can be taken home by their owners. The first two most likely choices would be Ferrari president Luca Di Montezomolo and Enzo Ferrari's son and 10% owner Piero. The third one is the FXX pictured here. It belongs to the Ferrari distributor for East Canada and Le Circuit Mont-Tremblant owner Lawrence Stroll. He is a true racing enthusiast and spends considerable amount of time in Europe supporting his son's racing career in a professional kart series with an eye on a Formula 1 seat. There was excitement in the paddock every time we heard a helicopter overhead hoping that Mr. Stroll would be stopping by to fire up the FXX and take it around the racetrack. We got an opportunity to get really close to the car and snap up some rare pictures. 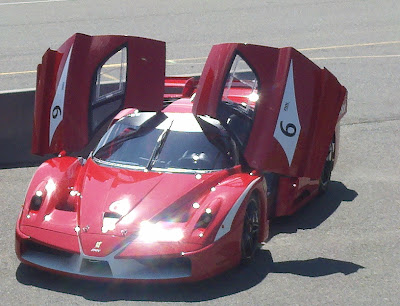 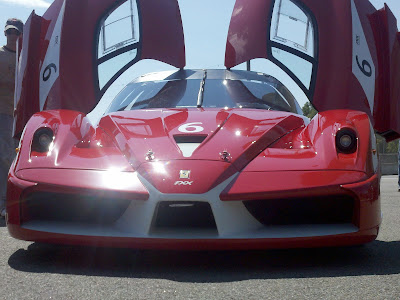 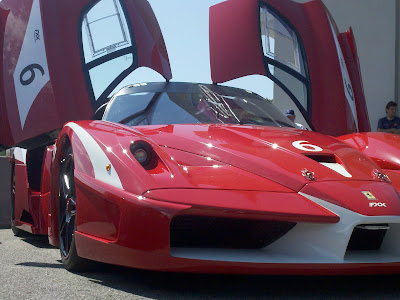 You can see the F1 contour in it if you squint. 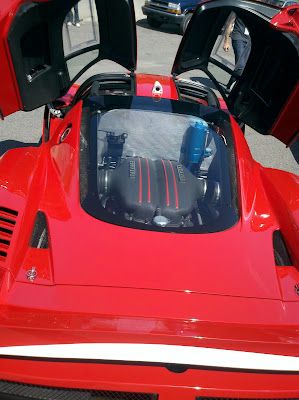 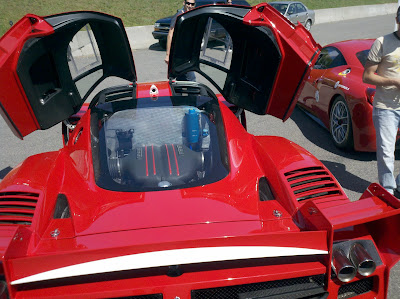 Looks unreal from this angle! 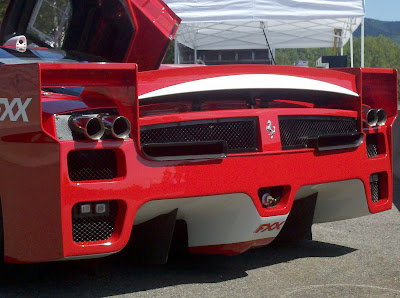 This is a serious diffuser layout! 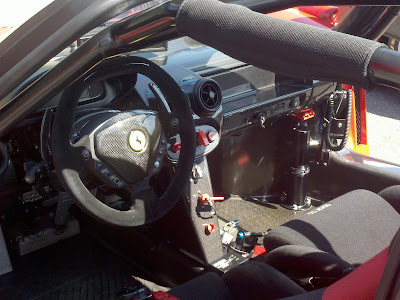 The cockpit from up-close. Note the exposed shocks in the corner, as well as white switch for track settings and brake bias regulator in the center. 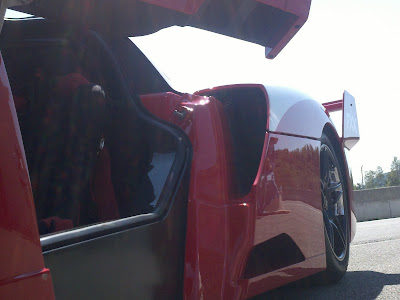 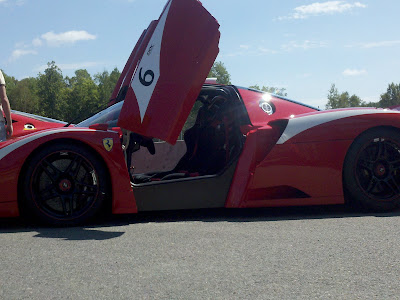 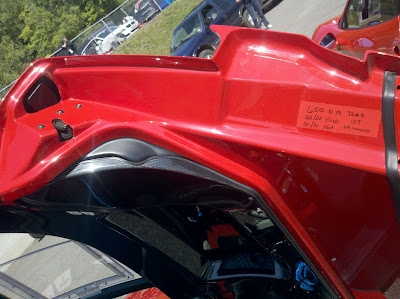 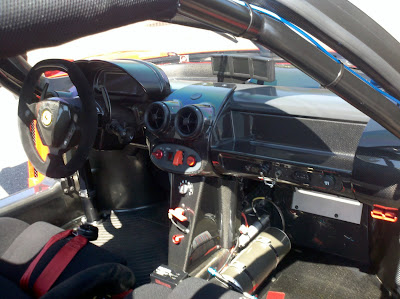 The Cockpit from the passenger side 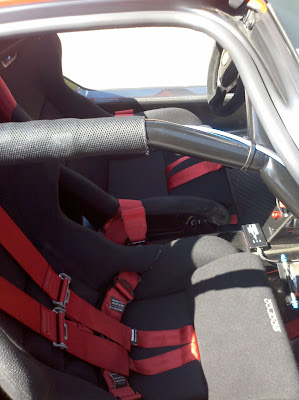 Standing right next to the open cockpit 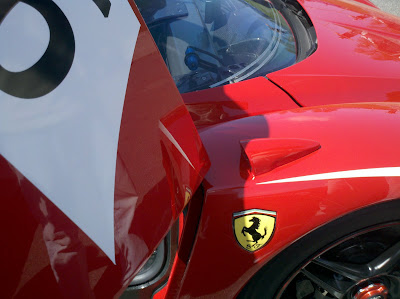 Cameras on both front fenders replace the sideview mirrors. 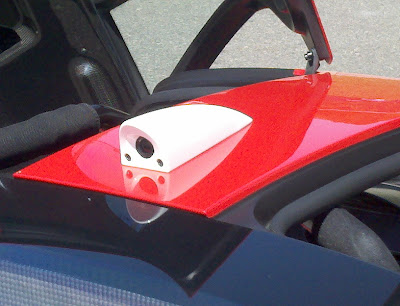 This backwards-facing roof camera broadcasts what's behind the driver on an LCD screen and replaces the rearview mirror. 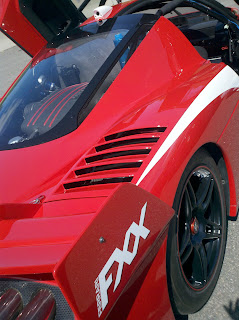 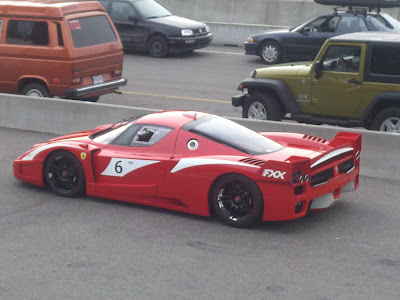 On pit road. This is how the FXX would look in regular traffic. 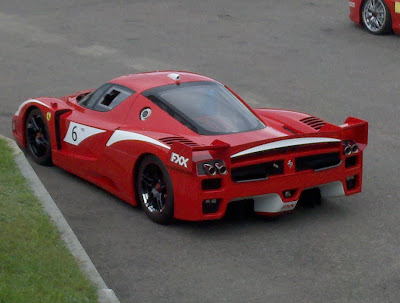 All dressed up and nowhere to go! 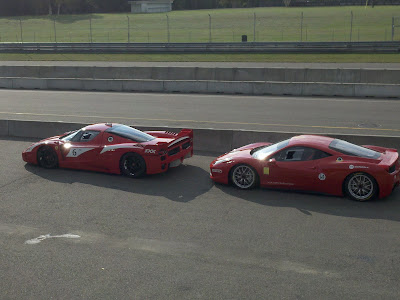 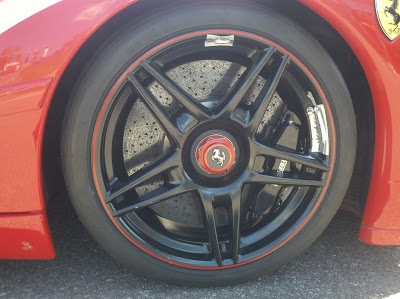 Center lug nut, ceramic brakes, super lightweight wheels.
Technical data:
Production: 2005–2007 (30 Produced)
Class: Track day car, Development vehicle
Body style: 2-seat Berlinetta
Layout: Rear mid-engine, rear-wheel drive
Engine: 6.3 L V12
Transmission: 6-speed sequential
Wheelbase: 2,650 mm (104.3 in)
Length: 4,702 mm (185.1 in)
Width: 2,035 mm (80.1 in)
Height: 1,147 mm (45.2 in)
Curb weight: 1,155 kg (2,546 lb)
The initial plan was for Ferrari to build 29 FXX, however, one special 30-th edition was made and presented to Ferrari's F1 World Champion driver, Michael Schumacher, when he retired from Formula One racing at the end of 2006. This black unstriped Ferrari FXX, owned by Michael Schumacher, was featured on Top Gear. Driven by Schumacher dressed as The Stig, the car completed a lap of Top Gear's circuit in 1:10.7, which was full 7 seconds faster than any other car tested at the Top Gear track. However, the record was removed from the lap board by the hosts after they realized the lap was completed on slick racing tires, which are not road-legal (all cars on the board must be legal for street use).
Ferrari FXX Top Gear Track Record
Posted by CT at 12:16 AM