When the "Check Engine" Light Is Not Right!

Imagine every time you sneezed or hiccupped, you had to go see the doctor. It cost you $120 or so, a few hours of lost productivity, and probably a lot of worries (good thing the diagnosis was good and the doctor said you were OK!). This, for the most part, is how the "Check Engine" (or “Service Engine Soon") light works in most modern cars, except you go to see the dealer.

I first saw the “Service Engine Soon” light on my 2001 BMW 325i just a day or two after I installed the first modification in it: an aftermarket cold-air intake. The warning looked ominous to me and it freaked me out. Did I just screw up my engine? And how do I “service” it? I went to the dealer on the next day and they said the code that had been triggered was related to an “out of range parameter: impermissible air range”. I checked the intake again and I was convinced it had been correctly installed. I knew many other 325i’s were running it and had no issues with it. The car exhibited no drivability issues and after a few days, the light disappeared. To this day, the light still comes back every once in a while when we get the first cold weather spell each Fall and then it clears itself out. 10 years, 100 track days, nearly as many autocross events and 170K miles on the engine later, the car is still running as good as new.

The “Check Engine” light is not unique to a car model. All cars sold in the US after 1996 were required to have a diagnostic system to track emissions-related problems. This system is called OBDII (On Board Diagnostics, second generation) and it contains a set of monitored parameters with corresponding fault codes. Regardless of the vehicle you drive, you have probably seen the “Check Engine” or “Service Engine Soon” light displayed on your dashboard at least once. And similarly, your first reaction might have been to get frustrated or even panic. You cannot know what the problem is without a code reader because there are literally hundreds of possible reasons for it. Sometimes the light is alerting you to the real need for repair, but most often, it is merely indicating a simple type of problem (low coolant level, loose gas cap or oil cap, etc.)

When the “Service Engine” light came up on in my wife’s 2001 Audi A4, we took it to a local shop for some other maintenance work and, naively thinking the quick code read would be free, I asked the owner to check what had triggered the light. To my dismay, they charged us $120 to read the code and clear the light. “But it only takes two minutes to read the code, how can it be that expensive?”, I argued. They claimed they needed a $10,000 computer to be able to read the code. While researching the triggered fault code, I found out that there is a decent generic code reader which can be bought for a fraction of the $10,000 price the shop had quoted for their reader. 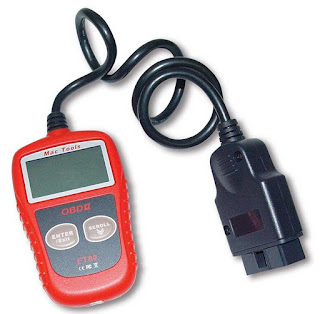 Mac Tools ET80 Code Reader, $87 at AutoZone
This tool works with most, if not all, manufacturer specific codes for domestic and import cars. It is also capable of clearing all pending and current codes. This compact hand-held reader is super-light and it fits easily in the glove box. As an added benefit, it does not need batteries. It plugs into the OBDII port under the dashboard. At one autocross event, my 2008 Z4 M Coupe went into limp mode, which severely limits the RPMs and the speed with which you can rev up the engine. I was lucky enough to find another driver who had the Mac reader with them.  A quick read indicated the throttle position sensor had gone bad so the drive-by-wire throttle system was getting confused about how much throttle I really wanted. The key thing is, the code description was close enough for me to know that the engine was fine, it was OK to drive the car, and that I just needed a short trip to the dealer. Based on the dealer’s factory code reader, the tech had also concluded that it was the throttle position sensor. And not even their $10,000 code reader is absolutely perfect when it comes to diagnosing the exact issue. The  problem did not permanently disappear even after the dealer replaced the throttle position sensor. They were finally able to trace the actual issue to a chafed wire going into the sensor.

So save yourself some money and get a basic code reader like the Mac ET80. It's a peace of mind that will come in handy a lot more often than that Fix-A-Flat, flares, emergency reserve of Trail Mix bars, or whatever other junk you have dangling around the trunk, you know, in case something happens...
Posted by CT at 11:01 PM