Merry Christmas to All from One Hot Lap!

'Twas the night before Christmas, and all through the valley,
Not a sports car was stirring, not even Ferrari.
The stockings were hung on the Tirerack with care,
In hopes that Hot Nick soon would be there. 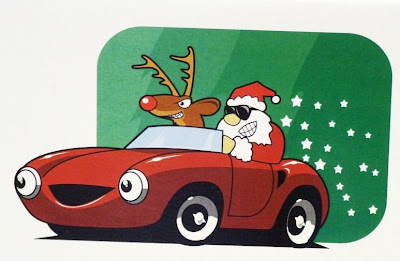 The kiddies were nestled all tucked in their Snuggies,
While Porsches and Mazdas raced in their heads;
Mom in her suit and I in my race Huggies,
Had tucked in the Lotus, and then hit the hay.

When out on the road there arose such a clatter,
I sprang from my bed to see what was the matter:
Expecting to see a Bimmer roar by,
We raced to the window, my dear wife and I.

The moon on the chrome of her baby Lago,
Gave the brightness of noonday to objects below.
When what should my wondering eyes betray,
But eight tiny Fiats, pulling a sleigh.

With a small hero driver so steady and quick,
I knew in a moment it must be Hot Nick!
More rapid than Grand Prix his little fleet came,
And he poured on the coal as he called them by name.

Like Ayrton Senna and Prost fighting a duel,
They broadslid the driveway and turned on the fuel;
Up to the garage where they braked to a stop,
The sleigh full of goodies with Santa on top.

The sleigh was carbon fiber - Pagani design;
In British Racing Green, it really looked fine.
The badge bar up front stood out clear and bold,
The collection of badges a sight to behold.

He was dressed up all in Italian Race Red,
From the tip of his toes to top of his head;
A bundle of speed parts he had on his back,
And he chuckled with glee as he opened his pack.

His eyes, how they sparkled, like a spinning OZ wheel,
His beard was the silver of machine-tooled steel;
With a little round face and a chubby waist line
That shook when he laughed like that M Coupe of mine.

He started his task without saying a word,
The idling exhausts were all that was heard.
Wire wheels for Junior, to fit his TD,
Hood strap and windscreens for Lotus and me.

Some paint for the Bug, marked "French Racing Bleu",
Castrol, headers, and supercharger, too;
The last thing he left was the best that could be,
One Hot Lap reading for the family and me.

He jumped to the sleigh and gave his mentions,
Then away they all flew like a wild start at the Lemons,
And I heard him exclaim as he quickened the pace,
Merry Christmas to all and to all a good race!

Author Unknown (with a little help from One Hot Lap)
Posted by CT at 12:57 PM