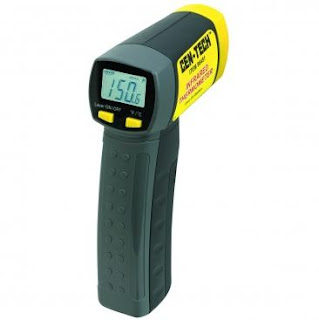 No. 10 on our list: A Pyrometer $19.95 from Harbor Freight when really on sale
You know, some things in life you just gotta have. It doesn’t matter why and what for and how much they cost - you just want them and you don’t have to explain a thing or rationalize your choice. That’s how I felt the first time I saw an infrared thermometer (also knows as pyrometer) at a track event some 10 years ago.
Just Point It And Get Instant Temperature.
It works on any surface, right now! But oh, were they expensive!  $300 for a little laser temperature toy was not easy to swallow. I couldn’t afford it back then but like all electronics, pyrometers’ pricing has gone down significantly in recent years. So when I got an e-mail from a friend recently saying that there was a huge sale on them, I jumped on it right away. A day later, I had my very own pyrometer!
How Does It Work at the Track?
The pyrometer doesn’t lie when it comes to tire temperature.
If the outside shoulders of the tires are warmer than the insides, you probably need to add more negative camber, thicker sway bars, stiffer springs or any other suspension adjustment that would reduce body roll in turns and widen the tires’ contact patch. If the inside shoulders of the tires are warmer than the outside, the outside shoulder of the tires probably doesn’t get a chance to do as much work as the inside, again reducing the width of the contact patch. This may be due to running too much negative camber or setting tire pressure too high.

If the fronts are much hotter than the rears, you probably have some understeer or you are not using the rears to their full potential under acceleration (assuming a RWD car). If the rears are almost as warm as the fronts or even warmer, you are probably sliding the rear of the car too much, which is rarely the fastest way around the track. All of these might be related to suspension, tire pressure and your driving style. Key thing is, it should give you a fairly good indication on which areas to target for improvement.
Track Setup, Here I Come!
It was exciting to measure my car’s tire temperature first time I brought the pyrometer with me to the track. The front tires’ insides were nearly 20 degrees cooler than the outside shoulder. It was evident that with such a significant temperature difference, I needed considerably more negative camber than the -1.5 degrees I was running in the front. This is the most you can get out of my Z4 M Coupe’s stock setup without camber plates or camber bolts and the pyrometer’s reading put it all in clear perspective. The rears’ outside shoulders however, were 5 degrees cooler - it looked like I was running too much negative camber in the rear. The front tires were also measurably hotter than the rears, so I must be leaning on them quite a bit in turns and maybe not using enough slip angle to allow the rears to put all the power down when exiting. And the “pyromaniac” fun doesn’t stop with the tires. Pop the hood, check the temperature inside the engine bay. Point at the rotors, wow, shouldn’t these be on fire by now based on the temperature reading?
Added Benefit: It's a Great Toy at Home
I found really good use for the pyrometer at home as well. You don’t always have to measure hot stuff; cold stuff is just as much fun to measure too! Now I could check the temperature of the beer bottles in the fridge before I pop one open. I am not taking chances with that Coors Light cold-activation bottle (very funny video here). And frankly, it doesn’t matter how anybody else measures things.  It’s more fun when I measure them my way! Just like Ty Webb in Caddyshack:
Judge Smails: Ty, what did you shoot today?
Ty: Oh, Judge, I don't keep score.
Judge Smails: Then how do you measure yourself with other golfers?
Ty: By height.
A Pet’s Favorite Toy Too
To our cat Marshmallow, the pyrometer’s laser beam is like a tennis ball to a dog. He may be asleep upstairs but as soon as he hears the beep from the pyrometer’s on switch, he rushes downstairs ready to go catch that pesky red laser dot. He contorts his body in the air acrobatically, runs around in a circle and finds a way to climb high on smooth walls. Even when he is exhausted and he lies down on the kitchen floor to catch his breath, his eyes are still feverishly tracking the beam. All of a sudden, the virtually unknown pyrometer has become a hugely popular toy at home. To use another Caddyshack quote, “This crowd has gone deadly silent, a Cinderella story outta nowhere. Former greenskeeper and now about to become the masters champion.”
That's the pyrometer for ya! Proudly sitting at No. 10 on our list of things to bring to the track.
Posted by CT at 11:39 AM