If the dogs drags their feet, they lock up and just keep sliding along the sand. With an ABS system, they would be forced to take little steps when they start dragging their feet, which allows them to regain traction. 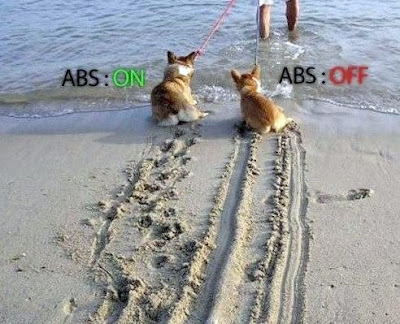 ABS is somewhat less efficient because it forces the dog to take steps instead of working on stopping in a consistent manner. If done correctly, dogs trained in threshold braking can slow themselves faster than ABS-equipped dogs. Many competitive racing dogs prefer non-ABS systems. However, in order to gain maximum advantage, the non-ABS equipped dogs need to practice threshold braking repeatedly. This is where tennis balls come into play: A good training technique is to find a section of a test-track and mark the start of the braking zone with a cone. Throw the tennis ball fast and train your dog to get to where the ball will land and threshold brake starting at the cone. Provide treats every time they catch the ball after the shortest braking distance from the cone.

And this applies to you too, lap dogs: go out there on our favorite parking lot when there's no-one around and practice threshold braking until you get it right. Or better yet, sign up for an advanced driving school. Skills like this will come in very handy next time you need to stop in a hurry!

DrivingFast.net has a much more scientific (and considerably more boring) explanation of how ABS works.
Posted by CT at 8:00 AM