Grocery-Getter Family Caught Cheating Again, This Time with a Porsche 911!

The young family that was caught cheating with illegal groceries in the trunk of a BMW 535xi  in this autocross video has struck again! One Hot Lap's secret photographer Clio was able to snap up this spy shot of the couple's new Porsche 911 during testing for the upcoming 2012 season: 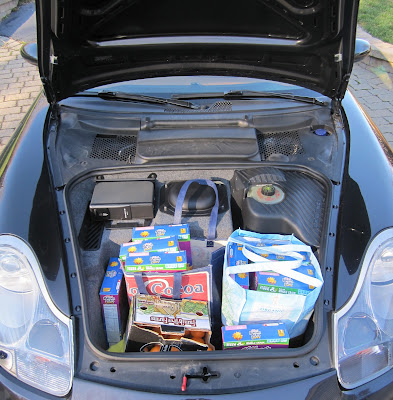 Unlike the past cheating scandal with illegal weight in the trunk, this time the perpetrators are targeting front-end grip with groceries tucked in right under the hood.

It is evident from the spy shot that these criminals have used the fortune amassed from illegal race wins to upgrade from Ramen noodles and SpaghettiOs to Raisin Bran Crunch. We are yet to determine why exactly 10 boxes of Raisin Bran Crunch were deployed in this particular test. Maybe it was in attempt to use the high dietary fiber contained in raisin bran cereal for drastic reduction in driver weight in the minutes immediately preceding the race? We firmly believe that dropping the Bounty rolls from the new car setup is a critical mistake that will cause messy discomfort for the driver and prevent him from perpetuating this shameless scam!
Posted by CT at 12:44 AM