It's just a fact of track driving: As much as you try to get the right "line" and hit the apex every time, sometimes you're too early or too late. Most often, it's no big deal and a little correction in steering, braking or throttle gets you out of trouble. However, things at the track happen fast and sometimes you can end up way off the driving line. That's when you should remember what your instructor probably told you a hundred times: Don't over-correct! Putting two wheels off the pavement is OK as long as you keep the wheels straight. And if you're going to go completely off track, try to keep the car as straight as possible with both feet in (clutch and brake).

Jump to 1:12 in this video where the black BMW 335i enters Turn 2 of Washington State's Pacific Raceways. Turn 2 is a fast sweeper with exit speeds reaching 80mph or so on a hot lap.

Watch carefully. At 1:19, you can clearly see that the car is off the driving line and missing the apex by 2 car widths. As the car exits the corner, it is too far to the outside of the track and it cannot maintain that line (you can see the car sliding a little). The driver doesn't attempt to slow down even though he is offline. Eventually, at 1:23, the rear right wheel leaves the pavement and catches some dirt, which upsets the balance of the car.

The driver could have put two wheels off the track safely and unwound the steering wheel to regain control. Instead, he over-corrects and abruptly steers the car to the left in an attempt to keep all 4 wheels on the pavement. What happens next is predictable: The rear end swings, the car shoots across the track and ends up going off. Luckily the driver catches the car's rotation just before it goes airborne. Going off sideways could have easily caused the car to roll over. Case in point: Don't over-correct! It's much better to put two wheels off the track while you still have control over the car than end up going off with all 4 and lose control. 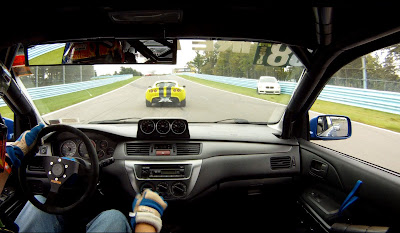