Here's a really funny step-by-step tutorial on how to drive another car off the track. Should be very handy if you catch up with a slower car whose driver is not checking his mirrors and ignoring the blue flags!

The video only works if you turn up the volume!

Really cracks me up that he almost went off-track just following his Nemesis at 1:16!!

OneHotLap loves racing in the rain: 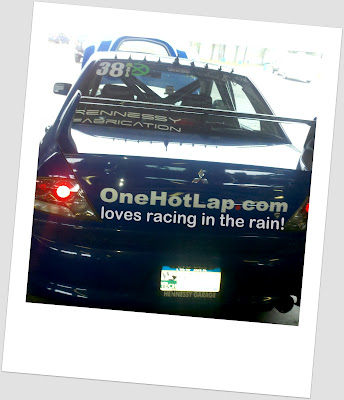 And we have never caused a fiery explosion by slamming into a jet drier under caution.
Read more » » »
Posted by CT at 11:15 PM

Email ThisBlogThis!Share to TwitterShare to FacebookShare to Pinterest
Labels: Racing

Somehow the Driver "... Avoided That Kangaroo", Said the Commentator!

This was a super close call and one very lucky kangaroo. It happened at a Bathurst 1000, which is the most popular race Down Under.

The “Tenths” and Their Appropriate Use on the Track

I was lucky to stumble upon this fantastic Track Wisdom series of advice written by private racing coach Peter Krause in response to popular threads on various high performance driving/racing bulletin boards. My favorite write-up was on the “Tenths” and their appropriate use on the track. As you will find out below, the real fun starts at 6/10s! 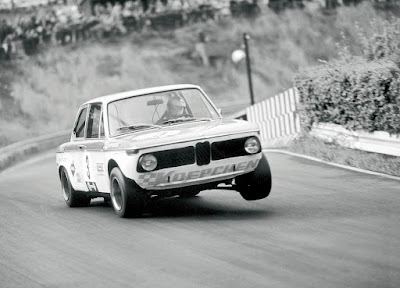 A Dizzying Lap Around the Nurburgring in a Viper ACR-X

Viper Club of America has just released this video of the race-only Viper ACR-X pulling off a 7:03 lap time around the Nurburgring. This lap time is very impressive considering it's 10 seconds faster than the street-legal Viper ACR's time!

The 7:03 time is a track record for a factory vehicle produced by a large manufacturer. To be fair, the Ferrari 599XX has managed a 6:58, the Radical SR8LM has posted a 6:48 lap time, and the Pagani Zonda R tops both with a time of 6:47. But I don't think any of these 3 (even Ferrari) can be considered a large manufacturer.

30 Years' Worth of Dakar Adventures

They don't call Dakar The Most Dangerous Race in the World for nothing. Here's a very cool and amusing compilation of adventures over the rally's first 30 years.

No wonder bikes get the bulk of the footage here - it's a lot easier to see the riders than the drivers.

This race duel between a Porsche 911 GT3 and a BMW 1-series at the Dutch Supercar Challenge will keep you at the edge of your seat for full 10 minutes! The really close calls at 4:21, 4:46 and 7:00 nearly had me screaming "Get out of the waaay!" After an 8-minute assault, the 1-series finally passed the GT3, only to get loose in the next turn and cede back the position. It took 10 1/2 minutes for the 1-series to make a pass that sticks and manage to pull away for good. Amazing battle!

This is a very well set up 1-series. It has a 6-cyl 3.0 ltr engine tuned to 330 hp. Gearbox is a sequential 6-speed with paddle shifters on the steering wheel. It also has a wide body kit and highly adjustable full race suspension. Tires are 250 mm wide Dunlop slicks.

What really drew me into watching the video was how different the two cars are: the GT3 pulls away on the straightaways and the 1M gets right back on its tail under braking and cornering. Maybe the 1-series was set up better than the GT3 for this particular race but it's hard to argue that the driver skill is what determined the end result. Fantastic driving!

Email ThisBlogThis!Share to TwitterShare to FacebookShare to Pinterest
Labels: Racing

I found out that the enduro karts in the World Karting Association's events reach jaw-droppping speeds of 140 mph!! Check out the racing action starting at 2:20 in this video. These are insane speeds considering the lack of any safety features in the karts. They don't even have a rollbar, wow!

Email ThisBlogThis!Share to TwitterShare to FacebookShare to Pinterest
Labels: Karting

This Is What Racing's All About!

Private racing coach Peter Krause shows some terrific moves in this onboard video from the Gold Cup Historics at VIR in June 2010.

At the start of the race, Peter gets shuffled back to fifth from a third place starting position. He reclaims forth place back form the orange Lola, then back to third past the silver/blue and yellow Swift, then second after the leader falls off in Turn 4, and finally, the awesome pass for the lead coming out of Hog Pen.

I love the tussle during the first pass at 0:32, the bold pass on the outside at 3:50, and the final pass for the lead at 6:12. Amazing moves and spectacular racing action! 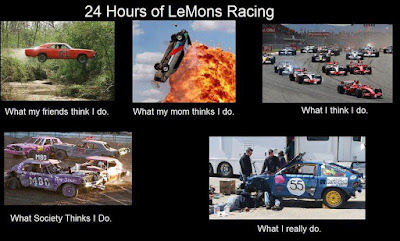 "What I really do" is spot on! Some of the driving that I've seen at LeMons is not too far off from "What Society Thinks I Do" either.
Posted by CT at 12:32 PM 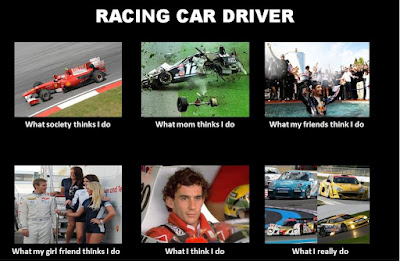 During a recent visit to the Napa Valley, I had the chance to stop by and check out Infineon Raceway. Infineon, formely known as Sears Point, is just a few miles North of San Francisco and a stone's throw away from Napa and Sonoma. It looks like an amazing track and the facilities are top notch. It is a 2.22 miles (3.57 km), 12-turn course with some serious elevation changes. 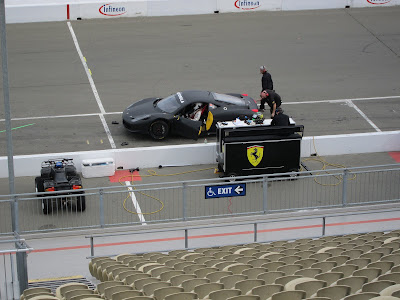 I timed the visit perfectly and was lucky enough to get there just as Ferrari Challenge race team R3 Motorsports was out on track testing the new Ferrari 458GT. What a car! What an insanely good soundtrack!!! 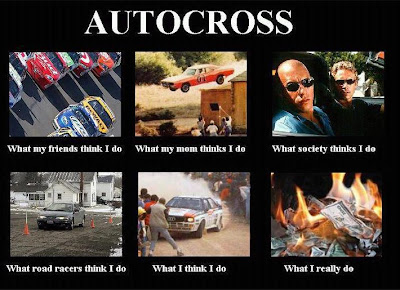 I just hope my wife doesn't see this or I may have some 'splaining to do!
Posted by CT at 1:00 PM 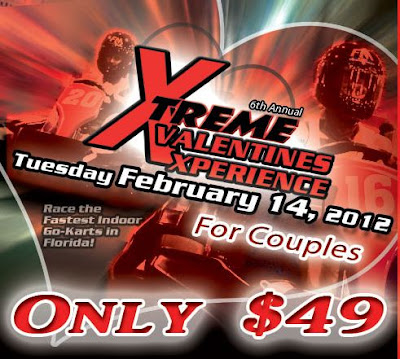 The $49 package comes with 2 eight-minute race sessions, 2 cocktail drinks, arcade game cards and 2 rounds of mini golf. Sounds like a dream Valentine's day to me. I think I'm in love!
Posted by CT at 12:32 PM

OK, so I have to admit this video almost fooled me when I first watched it. How can a formula car (or any car!) go triple-digit speeds on snow and especially in single-digit temperatures when everything is iced up!?

Well, they sort of cheated!!

Highlights from the 2012 WRC Rally Sweden

Never thought I'd say this but I'm getting snow withdrawals this Winter. No snow in the Northeast except for a freak storm on October 27 last year and then a couple of inches in January. I really miss driving on snow. That's probably why the 2012 Rally Sweden highlights look better than ever! Check out the insane jumps starting  ~ 2:41.

Best Formula Car Ever Built in a Fast-Food Restaurant! 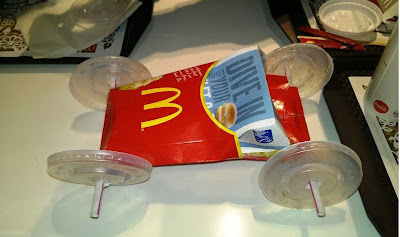 Submitted by One Hot Lap member StoyanS
Here's a spy shot of the best formula car ever built in a fast-food restaurant!

Email ThisBlogThis!Share to TwitterShare to FacebookShare to Pinterest
Labels: Random

The Australian Dukes of Hazzard Do It Differently!

Unlike the American Dukes of Hazard, their Australians cousins:
1) Do not use General Lee's Dixie horn and
2) Land in water!!!

This Is How You Review a Car!

The review is dynamic, exciting, breezy, fun, informative, and it really gets you thinking about the car. Until someone invents how to smell the smoke coming out of the tires or feel the lateral G's under drifting over the internet, this is as a good a review as you will find anywhere. OK, maybe the mic could be placed a bit better but other than that... 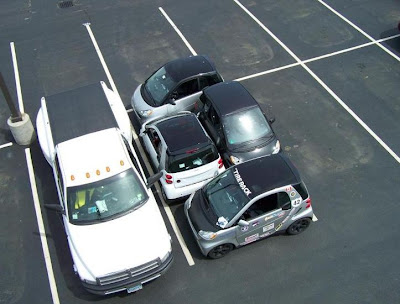 Email ThisBlogThis!Share to TwitterShare to FacebookShare to Pinterest
Labels: Name That Caption

What's Up with Supermodels Invading NASCAR?

News that Maxim supermodel Maryeve Dufault joined NASCAR just broke out. A Google Image search on Maryeve Dufault had me thinking I'd hit the Victoria's Secret catalog at first:

If you do a similar search for Tony Stewart, you won't come up with any pictures of him posing for Chippendale's (thanks God!)

Interestingly, Maryeve Dufault admits her daily driver has a slushie because "... now when I get in my own car, I relax."

It's a bonus the Abarth would probably make a pretty good track car:

Email ThisBlogThis!Share to TwitterShare to FacebookShare to Pinterest
Labels: LOL 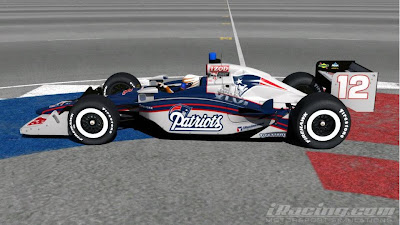 And this is what we think iRacing's rendering of the Giants' "race car" would look like: 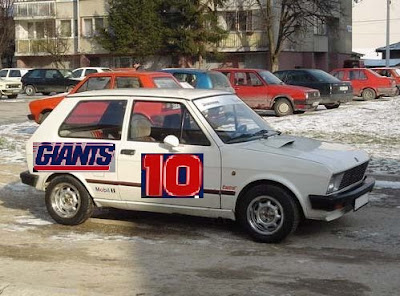 Can you guess which car will win the Superbowl XLVI race?

Email ThisBlogThis!Share to TwitterShare to FacebookShare to Pinterest
Labels: LOL

One Wild Ride in a Daytona Prototype!

In this video, Grand Am driver and 2010 Rolex 24 winner Joao Barbosa takes his wife out for a ride around Daytona International Speedway in the insanely fast Daytona Prototype 2-seater.

Turn up the volume to find out if you can tell the passenger's shrieking from the transmission's as the car goes 185+ mph!

1.32 Translation from Portuguese -> If I ask﻿ you to stop, you stop, OK?
1:40 Hard to tell the screaming from the gearbox. They go together so well!