OK, so I have to admit this video almost fooled me when I first watched it. How can a formula car (or any car!) go triple-digit speeds on snow and especially in single-digit temperatures when everything is iced up!?

Well, they sort of cheated!!

A closeup of the tires in the beginning of the video reveals a racing compound with barely any tread depth: 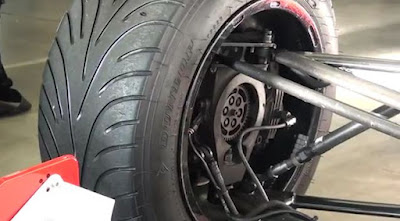 Video frames from the high speed run reveal tire tread pattern and depth typical for snow tires. These are the real tires going triple-digits on the fast lap around the Nürburgring: 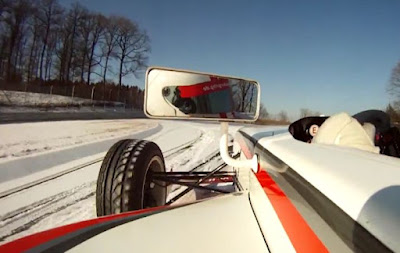 Video frames from the last scene in the video where the driver is fighting to keep the car straight at walking speed reveal the same racing tires as the opening shots in the video. Notice these tires do not have any visible grooves: 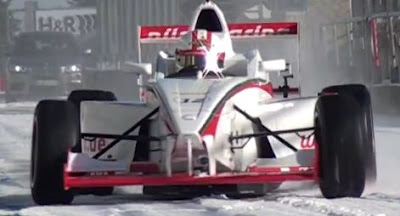 So to shoot the video, they took the car out of the garage and then back in on race tires, then changed the race tires to snow tires and did the high-speed lap with them. The video editing took care of the rest. It's really fun to go that fast and play with the big slip angles but these speeds and car control are simply not possible with race tires. This video really should have been a promotion for snow tires! And an excellent one at that!
Posted by CT at 11:10 PM