"A Few Thoughts on Cornering 101..." is another great topic in the fantastic Track Wisdom series of advice written by private racing coach Peter Krause in response to popular threads on performance driving. It is fascinating to get the author's thoughts on how the the car's layout influences cornering technique and approach. I find the discussion on "slow entry, fast exit" and "fast entry, slow exit" especially helpful. It continues Skip Barber's theme on the classic Type I, II, and III turns, which is something especially handy to review at the beginning of driving season when we need to brush off the Winter rust. Per Skip Barber's definition:

"In Type I (corners leading onto a straight), exit speed is king. You want to bias the throttle application toward the early side, so you would tend to do a shorter brake-turn in Type I corners.

In Type II corners where exit speed is not the prime consideration, you could make use of the braking and turning ability of the car and decelerate up to or past the apex, making up time in the braking zone.

In Type III corners, you are more likely to not only extend the brake-turning zone but to find yourself in situations where the  slowing down process will have to begin while the car is still turning."

All photos by Pierre Goyette, except where indicated
*** "A Few Thoughts on Cornering 101...", an excerpt from Peter Krause's Track Wisdom series.

This was in answer to a bulletin board post where someone had posited that the engine location/drive wheel layout influenced how a corner might be taken and whether cornering technique and approach should be influenced by the layout in the car.

“The expressions "slow entry, fast exit" and "fast entry, slow exit" refer to the type of corner complex you are attempting to negotiate, regardless of the layout of the car. Examples of a "slow entry, fast exit" corner, which is WAY more important to master than a "fast entry, slow exit" corner are Summit Point T1, Savannah T4, Sebring T4 and T10, Road Atlanta T7, VIR T1, T4 and T12 (Oak Tree), Mid-Ohio T4 and T14 (Keyhole and Carousel) as well as T8 (bottom of Madness), Watkins Glen T9 and Laguna Seca T11. 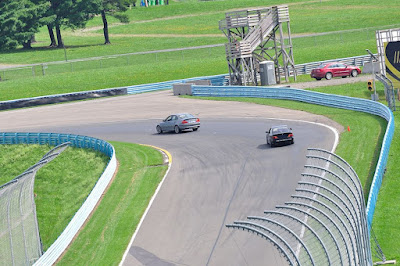 Turn 9 (The Off-Camber) at Watkins Glen
Photo by Neil Halin
Examples of a "fast entry, slow exit" that would be appropriate would be "throwaway" corners where the goal of increasing exit speed, at all costs, is mitigated by the fact that you must slow so soon after exit that there is no benefit to "slow entry, fast exit" and you are merely trying to maintain the greatest speed for the longest time in the broad range of the corner. Examples of a "fast entry, slow exit" are Lime Rock T1-T2 (Big Bend), Summit Point T5, BeaveRun T2-T3, Savannah T5A-T5B. "Fast entry, slow exit" is really the antithesis of the proper racing driver, as the goal is always to slow as little as you can, to maintain "fast entry, fast exit" above ALL else. <grin>

The mid-engine Ferrari F430 may need to be "overslowed" more than the other two to initiate decisive and effective "turn-in", but should enable the competent driver to use more throttle, applied sooner than the others, due to the better traction of the mid-engine positioning, resulting in greater exit speed.

The rear engine 911 will brake better and more efficiently because of the way that the weight distribution significantly and substantially changes, but the light front end will require more driver machinations to get the front to hook up, such as more aggressive trail-braking (or "brake-turning") thus delaying that all-important throttle application.

The front engine, rear drive Corvette, specifically the current Z-06, is one of the most neutral, progressive cars I've ever driven and will brake well, turn-in well and allow modulated throttle to be fed as quickly as the steering lock is taken off!

In analyzing the data from the 997 GT3, the F430 and the C6 Z-06, there is not much difference in the braking distances, corner entry or exit speeds between similarly street-tire equipped cars, but the way each of them do it is night and day.”