Grand Am - Crazy Daytona 2012 Photo Finish in Both GT and ST Classes!

After a 2-month hiatus, the Grand Am series is back racing at Barber this weekend. It wrapped up Daytona with an amazing photo finish in both the ST an GT classes (if you have only 1 quick minute to watch, start here at 3:25.)

This is one of the reasons why Grand Am is the best road racing series on TV!

This year Auberlen and Dalla Lana continue to co-drive both the No. 96 GS class M3 and the No. 94 GT class M3. Michael Marsal has been joined by longtime BMW driver Boris Said in the No. 97 GS class M3 this season. No stranger to Turner Motorsport, Said drove with Dalla Lana in the CTSCC finale at Mid-Ohio last year to help clinch the team and driver’s titles. At the BMW Performance 200 at Daytona International Speedway in January Marsal and Said began their season with a strong sixth place finish. Auberlen and Dalla Lana finished right behind their teammates in seventh. 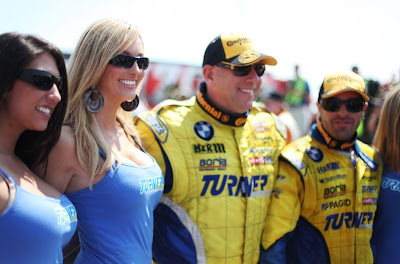 Tough life, Turner boys! And keep your eyes on the road, Billy!

“We have had great success at Barber,” said Will Turner. “Last year was especially good with Bill and Paul taking the GT victory and only narrowly missing the GS win. Both races at Daytona showed the BMWs have started the 2012 season with a less than favorable rules package, but the tight layout of the Barber circuit should favor the agility of our cars over the outright speed of our competitors.”

“The team has been busy testing and improving the cars since Daytona, I think they have made some good strides" said Bill Auberlen."Paul Dalla Lana loves Barber so I am really looking forward to Saturday's races…. Both of them!”

And here is a good Grand Am series primer:

Per Continental Tire, "Founded in 1999, GRAND-AM Road Racing showcases emerging and legendary drivers from around the globe and thoroughbred racing machines from the industry's leading constructors and the world's top automobile manufacturers. The series competes on the top road racing courses in America; pitting world class teams against each other, as well as the field, in an all out clash for driver and constructor supremacy.

GRAND-AM features multiple classes of race cars including The Grand Touring, GT, class which is home to production-based race cars that are similar in appearance to the latest high-performance sports cars. GT is a mixture of U.S.-produced muscle cars going against the international flavor, mainly German, Japanese and Italian models.

Taking the name of the sanctioning body's location - Daytona Beach, Fla., The Daytona Prototypes are the premier class of the GRAND-AM racing. These are exotic, mid-engine machines that are purpose-built for competition. With an incredibly dynamic horsepower to weight ratio, these vehicles weigh less than 2,300 pounds and tout engines capable of producing 500 horsepower. The result is a spectacular racing machine capable of speed up 195 mph that still have cat like reflexes. Each vehicle is custom built from the ground up at a cost of over $400,000. Although costs and specs are controlled, teams are encouraged to innovate in the design and construction of their vehicles, as well as engine and chassis combinations."

Love it how they call 2,300 pounds and 500 horsepower an "incredibly dynamic horsepower to weight ratio". I need to get me one of those!
Posted by CT at 1:00 PM