Fisker Karma Up Close and Personal in Boston

Considering there are only 500 of these in customers' hands worldwide as of April 2012, it was a treat to run into one of them on my way to the Esplanade in Boston today: 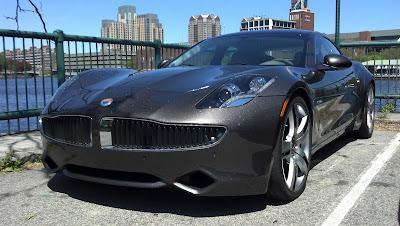 The official all-electric range for the Fisker Karma is 32 miles. The total range with a full tank of gasoline and a fully charged battery is 230 miles. The car includes a solar paneled roof as a standard option, which aids in the recharging of its lithium-ion batteries, as well as the cabin climate control system. The solar roof is capable of generating energy estimated to provide up to 4 to 5 miles of additional range a week, assuming continuously sunny days. No wonder all this adds to a total weight of 5,300 lb for the car. 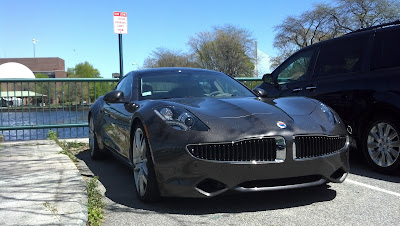 So glad the Karma I saw today was not the chrome travesty fitted with purple under-body neon lights that Justin Bieber and Selena Gomez were recently spotted in. Judging by the fact that this one was backed into a corner spot of a tiny parking lot, you can safely assume it is owned by someone who really cares for it. Still kills me to think that someone chose this over a Porsche 911 GT3 for that money, though...
Posted by CT at 1:00 AM