McLaren, maker of the famed McLaren F1 supercar and owner of the McLaren Formula 1 team, has a new car available to order for U.S. delivery right now. True, its MP4-12C name sounds more like a new music player format but the spec sheet is really impressive: 592 hp and 443 lb/ft out of a twin turbo 4L V8! It's loaded with electronics and all reviews so far are indicating it's one of the easiest supercars to live with on the street. 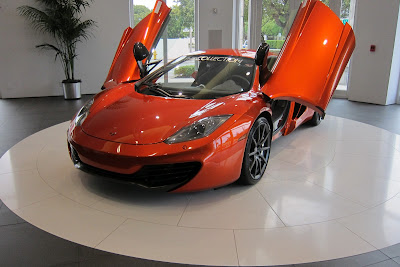 The MP4-12C's is very exclusive: its base price is $231,400 and there are only 9 U.S. dealerships you could buy it from. We visited The Collection in the Miami neighborhood of Coral Gables to find out more about it.

The Collection is a one-stop shop for a number of luxury brands such as Jaguar, Aston Martin, Audi, Porsche, Ferrari, and Maserati. McLaren was a recent addition and it naturally caters to similar customers. And there's no lack of customers looking for showy cars in Miami. I bet if we put it to a nationwide vote, Miami would be America's showoff capital.

The dealership is quite a sight and it resembles more a high-end restaurant than a car dealership: Hostesses greet you on your way in and there are a couple of lounges for you to relax and sip The Collection's "Kool-aid". 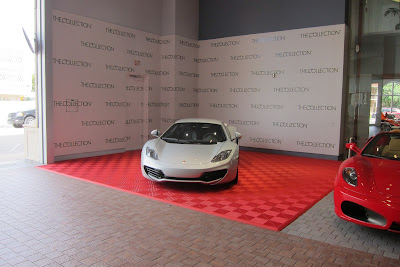 The McLaren section of the dealership has two brand new McLaren MP4-12C on display, with the Volcano Orange by far the flashiest of the two. 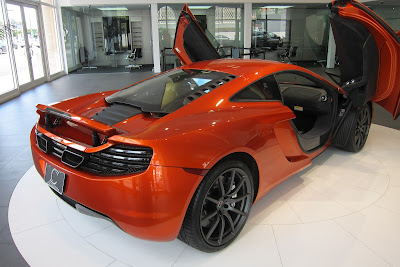 No supercar would ever be complete without scissor doors! 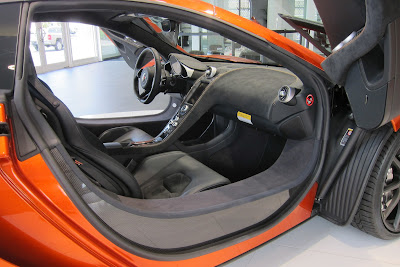 Bucket seat any lower than this should require a mandatory butt cup.


Amazingly, the MP4-12C was not even the coolest part on the McLaren showroom floor. That honor was reserved for the rolling chassis of the same car, which showcases its unique carbon fiber composite monocoque construction: 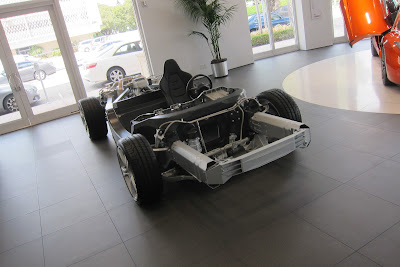 It is very cool to see how the car is built underneath, and how the extruded aluminum is bolted and bonded to the carbon fiber tub. This is truly advanced technology! Also notice the piping between the shocks on both sides designed to transfer fluid side to side in order to prevent wheel lift during hard cornering: 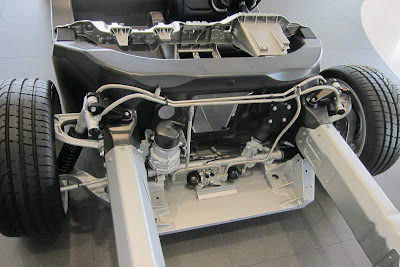 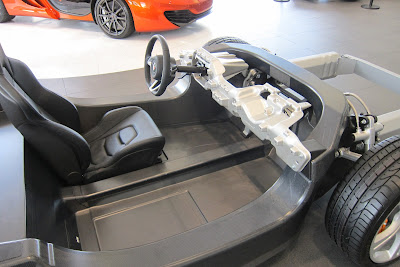 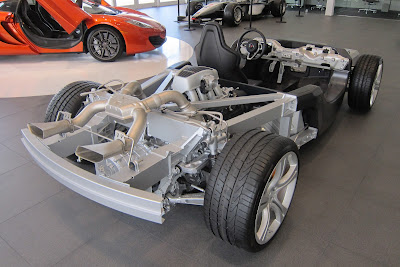 And just as cool, David Coulthard's 2000 McLaren Formula One car sits right there in the middle of the floor for all to enjoy: 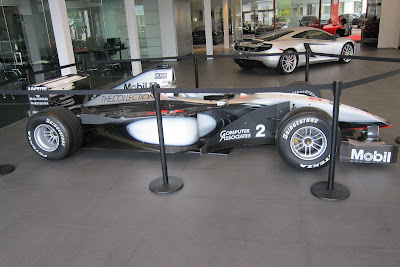 If I could figure out how to fire it up fast enough, I'd be tempted to take off with it and jail be damned!
Posted by Nicolas at 1:00 PM