Can an Oscar winner, a UFC heavyweight champ, the most popular Mexican soap opera star, an "American Idol" mentor, and Kim Kardashian's stepbrother ever find anything in common? Apparently, they can and it will happen at the 36-th running of the Long Beach Pro/Celebrity Race. To bring you the best entertainment value out of the event, OneHotLap is joining forces with Danny McKeever's FAST LANE race school, which spends 4 days training each of the celebrities in racecraft to prep them for the event. 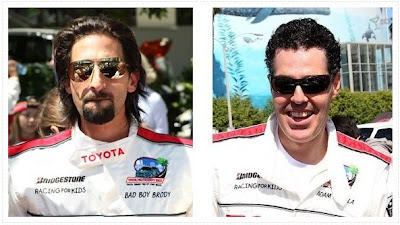 Oscar Winner Adrien Brody and comedian Adam Carolla are two
of the most talked about celebrity drivers at this year's race
The celebs will be racing identically prepared Toyota Scion tC for 10 laps around the 1.97-mile street circuit through the streets of downtown Long Beach. Keeping the Scions away from the cement walls surrounding much of the circuit will require some serious race skills. 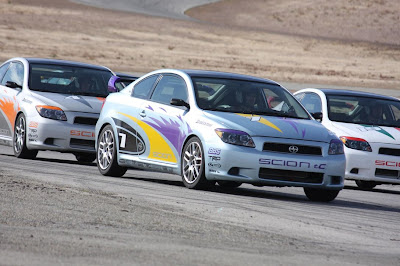 In our next write-up, OneHotLap will bring you all the scoop on the celebrities racing at the event. We will also cover the training process that the celebs go through to get ready for the race: the more important parts of the 4-day race training curriculum, some of the challenges and common mistakes by those new to the sport, as well as the most fun and exciting part of training. FAST LANE will also share some very cool stories from training in past years and OneHotLap will have exclusive photos from this year's training sessions. FAST LANE will have full access to the Celebrity Compound during the entire race weekend and maybe we'll figure out who's got the best pre-race routine. I'm putting my money on Adam Carolla!

And last but not least, it's worth noting that the race raises money for charity. Toyota donates $5,000 to Racing for Kids on behalf of each participant and another $5,000 to the winning racer's charity of choice. Racing for Kids—a national nonprofit program benefiting children's hospitals throughout the country—was created as a way to connect these children with their favorite celebrities and race-car drivers.