At the Polls: Best Sports Car for Street and Track

We asked which car you would buy for street and track (money no object) and the final results revealed a clear winner: 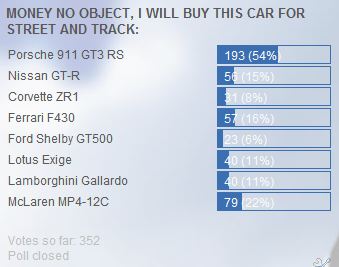 Of the 352 votes, more than half went to the Porsche 911 GT3 RS. That's quite a feat considering there were 8 fantastic sports cars to choose from! One Hot Lap has covered the GT3 RS in detail and it is well documented that there are great practical reasons to own one as well! 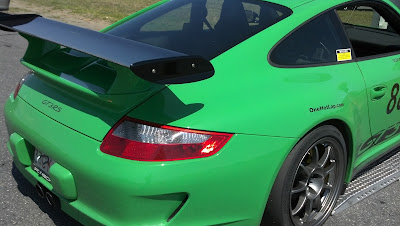 The McLaren MP4-12C came in second with 22% of the vote. This is a great start for the newly-released supercar. Our visit to the McLaren dealership left us very impressed with the car, especially its monocoque construction. 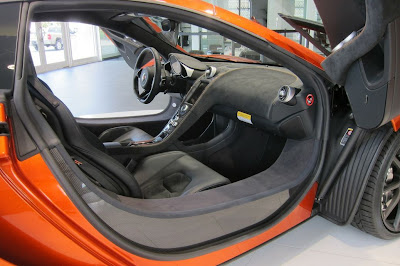 The Ferrari F430 came in third with 16% of the vote, just ahead of the fourth-place Nissan GT-R with 15%. The two cars could not be more different, though: while the F430 is very communicative, the GT-R provides less feedback than a Play Station 3 controller. That, however, did not stop it from sweeping the 2012 One Lap of America!
The Lotus Exige and Lamborghini Gallardo tied for fifth place with 11% of the vote. This is another case of two very different cars getting the same number of votes. The Exige is rear-wheel-drive, light and nimble; the Gallardo is all-wheel-drive, much heavier, and more powerful.
The Corvette ZR1 came in 7-th with 8% of the vote, ahead of the last place Ford Shelby GT500 with only 6%. No love for American muscle cars shown in our readers' poll, which leaves the ZR1 as the most underrated car of the bunch. It will probably beat any of the other cars on the track for a lot less money and it is pretty good-looking to boot. 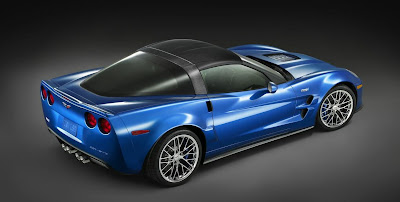 The poll was concluded before Carroll Shelby's passing - we don't know if the Shelby GT500's ranking would have been different had the poll taken place after his death but it's safe to say that car will have enormous collector's appeal.
Related posts:
2007 Porsche 911 GT3 RS at the Autocross
One Green Lap Reviews The Best Green Car Ever: A Porsche 911 GT3 RS!!
One More Practical Reason to Own a Porsche 911 GT3 RS!
Pictures from Genesee Valley Chapter's HPDE at Watkins Glen
I want to Be a Furry Red Muppet Monster for the Rest of My Life
One Hot Lap Visits a McLaren Dealership and Drools over the New MP4-12C
Posted by CT at 10:00 AM