From national level celebrities to local level celebrities, there is plenty of racing action and thrill to entertain everyone. BMW CCA - Boston's 2012 Karting Championship was no exception! At stake were bragging rights for a year and a highly-coveted championship trophy to help tell your grandkids a lifetime worth of racing stories! As expected, the racing action involved fierce fights for position, skills taken right out of a defensive driving academy, and much contact, of which Yours Truly is (very!) guilty as well. When the straight jackets were finally put on and the dust settled, Tom Rathje of saran wrap artistry fame was proudly holding the Championship trophy. Well deserved, Tom!! 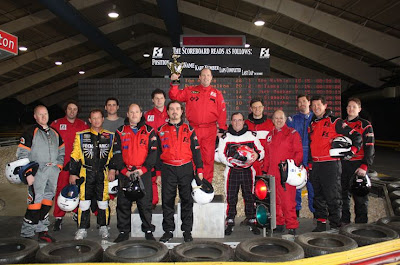 Front row (left to right) - Mark Gallagher, Ron Savenor, Chris Hill, Ralph Zajac, Jack Meeker (3rd), Russ Siggelkoe, Alan Middleton; 2nd row - Andre Perron, Christian Iantosca, Michael Taksa (2nd), Tom "The Benchmark" Rathje (Winner), Christo Tinkov, Peter Bergwall, and Jeffrey Strong. Picture by Jack Meeker
The fantastic hosts at F1 Boston created an incredible joint track for the Karting Championship by connecting two indoor courses with an outdoor patch of pavement:
Helmet cam by Michael Taksa
The format for the event was five minutes of open practice and three 10-lap qualifying races to set the grid positions for the 15-lap Final. Starting positions for the first qualifying race were drawn by lot, and then positions for the following two races were derived from the inverse order of the previous finish. The winner started last, the second place started next to last, etc. Points were awarded by finishing position in each race, and the starting order for the Final was based on the points earned in the three qualifying races.

Tom Rathje started the race first and stayed ahead of the pack for the entire final session, even opening a 10-second lead at one point! (Rumors are that his driving success is due in no small part to the secret ingredient provided by the Polish kielbasa market that sponsors him!) The FTD went to Michael Taksa with a time of 38.22 seconds. OneHotLap's only claim to fame was starting second in Q2 and winning that session. What a blast!