OneHotLap is thrilled to report that we have finally been able to obtain an exclusive interview with autocross saran wrap artist Tom R. In this video, Tom is seen carefully taking off the saran wrap at the end of race day. Although he was visibly content with the results from his proprietary wrapping technology, he was understandably short on words:

Tom mentioned in confidentiality after the interview that he wanted to first file for a patent before he reveals any additional details. He asked us to cut off the video right after someone from the crowd that had gathered around the car shouted "Oh, you are THAT Christo!" We think they might have meant he was "THAT GUY". Tom also mentioned offline that he is in talks for sponsorship with a sausage stuffing company and he preferred to keep a relatively low profile while the final deal is being worked out. We are hopeful we will have exciting breaking news to share on that front shortly.

The saran wrap fashion has spread fast throughout autocross paddocks in the United States. Pictured below is BMW CCA Boston Driver of the Year Mark Dudek who is always looking for an edge over his competitors. He was hoping to cut down driver drag in his convertible by adding better saran wrap aerodynamics around his body. Unfortunately, he had not mastered the wrapping technique as well as Tom and ended up wrapping his own hands in the process. After missing one of his runs and his mood soured, his friends thought it would be more fitting to take his Red Sox hat off and photograph him with this hated Yankees hat for everyone to see his misery: 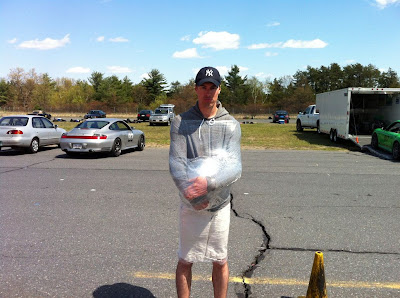 The Wright brothers too had their ups and downs before they ended up leaving a huge trail in history. Once perfected, the driver wrapping technique could be good for a full second at the autocross and we think Mark will be able to sort all this out in time for the next event.