Here are videos from the top two cars on r-comps and the top car on street tires at BMW CCA Boston's 2012 Autocross Event 3. Interestingly, even though the two fastest cars (an '11 EVO MR and a '95 M3) were entirely different, they had one thing in common that neither car was supposed to have: 315 mm wide tires all around!!

And here is Hank Wallace's first run for the day in the M3: a 60.5 with 2 cones and no SHITs! (This was the only run in which Hank took the second optional slalom on the left.)

So help me out here -- the difference between these two dirty runs is about a second and 2 "SHIT!"s. If my math is correct then, every "SHIT!" is good for about half a second. So if you can say "SHIT!" fast enough during a run, your time could be close to zero seconds and you'd own the course. Developing driving skills therefore is useless; the name of the game is to yell "SHIT" as fast as you can while driving the course!

Here's a video from the fastest run on street tires: an amazing 62.4 from Jon Cowen driving his well set up '98 M3:

And here is the best run of 64.7 in the OneHotLap Z4 M Coupe: good enough for 6-th overall on street tires. It probably does not deserve a mention in this elite company except for one detail: we own this site! 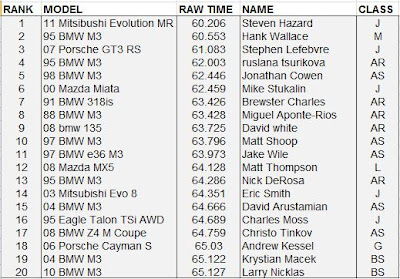 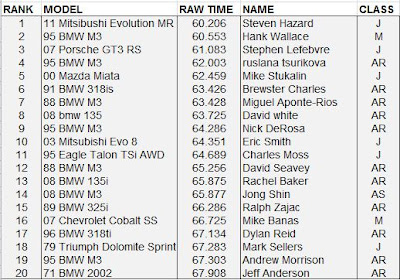 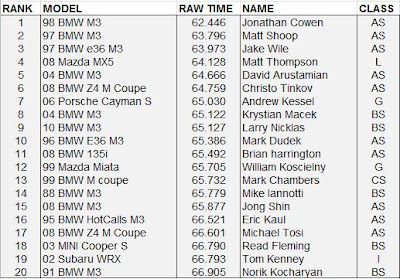 Link to the official Event 3 results

Up to 10% off exclusively through OneHotLap.
Details
Posted by CT at 12:27 AM