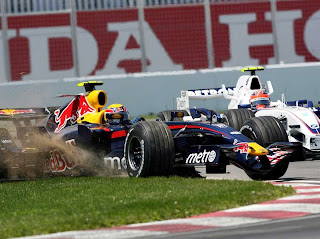 I was looking for some info on the upcoming 2012 F1 Canadian Grand Prix and remembered this article I'd written 5 years ago. It put a smile on my face thinking about the fantastic weekend we'd had at the race. I think the experience would still be very much the same today, even though many of the drivers are different.


I was lucky to have bought tickets to the Canadian Grand Prix a few months ahead of the race. The event was completely sold out and ticket scalpers were charging more than double the original price for general admission. The major reason? Sensational English rookie Lewis Hamilton had gathered enormous media attention with his pole position and was widely expected to win his first F1 race.

Logistics
Getting to and from the track was very easy considering the size of the event. The Montreal metro is fast, clean, and safe. Ironically, my son Jason liked the subway so much that he thought it would be cool to have lunch at the Subway restaurant located at one of the main stations. It might have had something to do with the checkered flags all around the restaurant but then again, these could be seen all around the city. We drove 5 hours from Boston to the culinary capital of Canada to go eat at Subway? 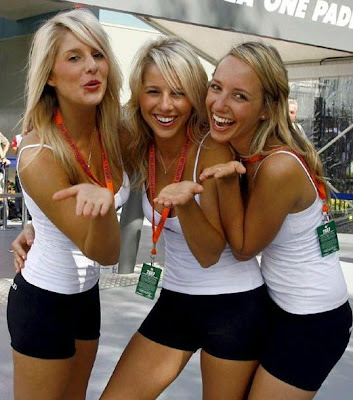 Some sections of downtown Montreal were closed to traffic and packed with people throughout the weekend. The party’s epicenter was right in front of Jacques Villeneuve’s Newtown restaurant on Crescent Street, which was also closed off to traffic with event sponsor booths on both sides of the entire street. You get free chilled Baileys shots from one vendor and then you can sit in an open cockpit car and try out a Canadian Grand Prix simulation game at Honda’s booth right next to it. I had trouble keeping my F1 car on the track – it was just too easy to spin it at lower speed, although the fact that the wait for Baileys was considerably shorter than the wait for the simulation game might have had something to do with it. The packed streets and bar balconies gave Crescent Street almost a Mardi Gras feel. The sight of women of all ages dressed for a great night out and proud to showcase their (not necessarily race) equipment added flare to the party. By the time we left in the evening, the street looked almost as packed as I remember Bourbon Street on Mardi Gras night. See the picture of the 3 girls? This is how you get hooked on Red Bull.


Rue Saint-Catherine Is for Car-Watching
The next street over from Crescent is the well-known Rue Saint-Catherine, along which a free-style procession of exotic cars mingled with the local traffic. Where else can you see a Lamborghini Murcielago immediately followed by a Ferrari Modena and a BMW M6? The vast majority of exotica were convertible: in stark contrast to track events, this is the place to be seen, not to find the limits of your car.

So there was this bright yellow Porsche Carrera GT parked on the side of the street and totally mobbed by onlookers. The guy in the passenger seat was wearing a color-matching bright yellow hat, except it had Ferrari lettering on it. I seemed to be the only one to notice or care about the discrepancy (the guy might as well be invisible in that gorgeous car). I turned to him and said:

“You need a Porsche hat”

He smiled and shrugged his shoulders:
“I am a Ferrari guy.”

He’s sitting in the wrong half-million dollar car then. Go figure… Maybe his lesser Ferrari was parked somewhere around the corner? 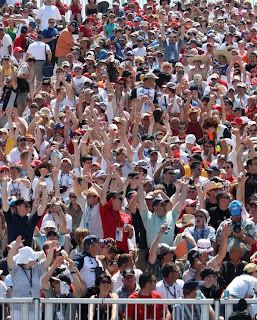 It’s race day! The atmosphere at the track is decidedly festive: there are Spanish toreadors all wrapped up in their red and yellow national flag singing praise about their country man Fernando Alonso, Polish fans all dressed in red and white outfits of their country’s national colors complete with matching-color caps with “Polska” lettering on them (just so everyone is clear on it!), English fans waving the union jack proudly, Brazilian fans still wearing their favorite soccer players’ jerseys, and of course, the myriad of Ferrari fans with the traditional Ferrari red, complete with Italian tricolore. We are standing right by the fence just 15 feet from the race line in a section of the track where cars are accelerating flat out. All your senses are engaged: you hear the cars through the earplugs and feel the vibrations throughout your body. I was holding a plastic bottle of soda and it just rattled in my hands while drinking. Cars hitting the rev limiter remind you of a sonic boom. You see these incredibly low cars blazing by at 200 mph and after a few laps, you can smell the brake dust and exhaust fumes all mixed up to produce an intoxicating feeling. 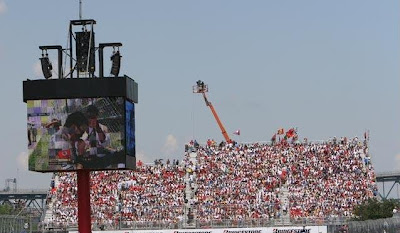 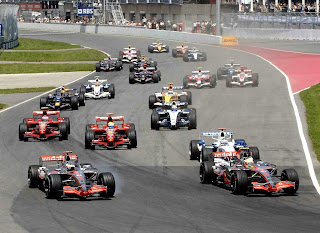 “Dramatic” is an understatement for this race: the Canadian GP had scary accidents, funny accidents, flattened animals, black flags, green flags, four safety cars, great drivers grass-hopping, World Champions being passed by backmarkers on sheer driving skills and a phenomenal win by an incredible rookie. The podium was entirely unique: Lewis Hamilton won the first (undoubtedly of many to come!) race of his career, Alex Wurz in the Williams gave his team its first podium in two yeas and his first ever on the 10-th anniversary of his F1 racing career, and BMW’s Nick Heidfeld drove a flawless race, even passing double World Champ Fernando Alonso, to give BMW its first ever podium. To add to BMW fans’ delight, this was the first race in which BMW lapped faster than Ferrari (by 2/10 of a second), which makes it the second-fastest team on the grid behind only McLaren. Not too shabby for a team’s only second season in Formula 1. 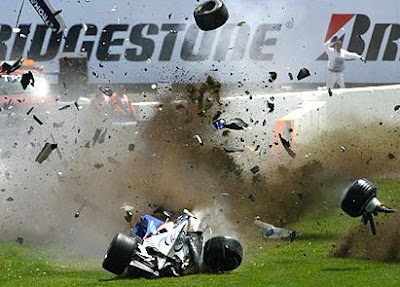 Robert Kubica's shunt was one of the worst in F1's history... 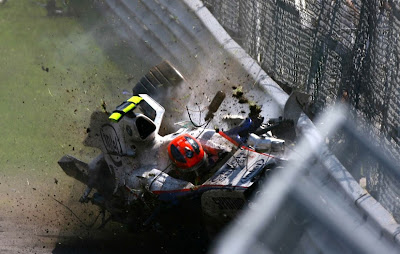 ... and he was extremely lucky to survive it.

What I Missed by Being at the Race 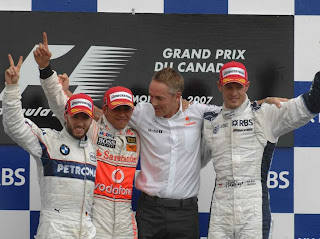 In a historic race like this, you do miss out on many of the race developments while at the track. I saw the race but I also wanted to watch it. Speed TV’s coverage is top-notch and undisputedly better than its British counterpart ITV! I enjoyed watching the race on DVR and I found out everything that I had missed while I was at the race. But nothing compares to being there in person!

One Last Note
It seems that the Montreal subway and roads were easily able to handle the 120,000 spectators on race day. We only hit light traffic leaving the city. It took us considerably less time to get to the track and leave it than to get through the U.S. customs...