This is what the starting grid at Le Mans looks like. I am green with envy that one of our fans is sitting so close to the start/finish line. And this is one of the greatest things about Le Mans - there are so many spots on the track where you can reach out and almost touch the cars as they are blazing by! 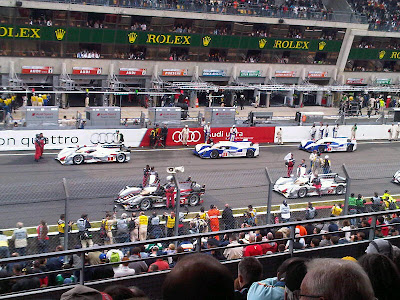 Here's footage from the incredibly dangerous airborne crash: Pierguiseppe Perazzini in the Ferrari did not see the LM Prototype driven by Anthony Davidson, turned right into him and sent him airborne. Davidson was taken to the hospital and was reported to have a broken back.

Audi take historic win at the 80th 24 Hours with R18 hybrid
(source: lemans.org)
"As the No.1 Audi R18 e-tron quattro of Andre Lotterer-Marcel Fassler-Benoit Treluyer took the chequered flag at exactly 1500 hours, Audi Sport today secured their 11th victory at the 24 Hours of Le Mans. But this was historic for a number of reasons as it was the first win at the world’s most famous endurance race by a hybrid-powered car, it was on the occasion of the 80th anniversary of the 24 Hours, and it was the first year that the famous endurance race featured as a round of the new FIA World Endurance Championship."

5151.8 km distance covered by the winners

40th victory of a French driver

33 pit stops for the winning car

29th victory for a German car

29th victory for a closed car

27th victory for a German driver

12th victory for a car with race number 1

8th victory for a team that won the previous year

5th the position of the best rookie in 2012, Marco Bonanomi.

2nd victory for a Swiss driver

1st victory for a car with non-permanant 4 wheel drive.

Up to 10% off exclusively through OneHotLap.
Details
Posted by CT at 1:30 PM