Performance Driving by the Gallon: Coast, Turn off, and Avoid Braking

Motorcycles, diesels, hybrids, vegetable cars, all sorts of people doing the fuel economy thing, trying to be green... and they were beaten by a low-tech, gasoline-powered Honda CRX that got 118 MPG over a 100-mile hypermiling event! 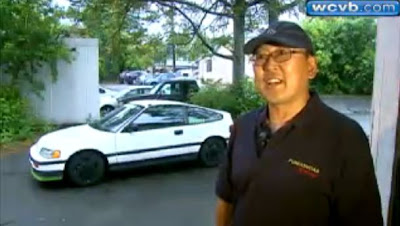 Link to the video

It took a successful autocrosser like Chang Ho Kim to teach everyone how to drive for fuel economy: Coast, Turn off, and Avoid Braking. Chang did not just win the event; he set a new event record for fuel economy!
But wait, WCVB says "His Honda is so old, however, that it has virtually NONE of the safety features that are required of a modern-day car." What would those features be, WCVB? Sound-deadening materials, 12-way memory power seats, and 200-GB hard-drives?
Per Chang Ho Kim, event winner and owner of FunHondas in Maynard, MA:
"The Honda CRX is the HF model, 62hp, has never seen an autocross, though the suspension that is in the car came out of my ST Civic, so the suspension has seen many autocrosses. It is low tech, though it does have fuel injection which was fairly new to Honda in 1989 (they started in 1985). No ABS, no airbags, no traction control, no power windows even. It doesn't go very fast, except in turns, dont really have to slow down with its lightweight (approx 1800#) and its racing suspension. The biggest thing for fuel economy was the tires, ultra low rolling resistance Nokian Hakka R snow tires, brand new for the competition. Full disclosure, I am a dealer for Nokian, so I learn about thier tires and put them to the test."