Will We Ever Find out What Caused This Gut-Wrenching 145 MPH Crash at Road America? 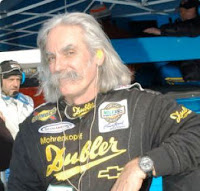 Robert Dubler has been a staple driver on the long-running One Lap of America tour, competing in each of the past 12 years. I first met him when I did the One Lap race back in 2005 and he immediately struck me as one of the most charismatic character on the tour: the Clint Eastwood of Switzerland and The Wizard of Oz monikers equally apply. Dubler is also one of the best drivers I have ever met: he was driving a Pontiac Grand Am P.O.S. rental back in 2005 and he was usually running in the top half of a field where well set up cars with 300-400 HP were considered just average.

Needless to say, I was shell-shocked to hear that Dubler had a horrific 145 MPH crash and rolled the car over the fence at Road America during the 2012 One Lap event. How could that be? I've seen him drive and I know what he is capable of. Then I found this intense and absolutely horrifying in-car video of his crash.

What would possess a superbly experienced driver like Dubler to turn his CTS-V wagon deliberately off track at 145 MPH? Look where his car is pointing right before the crash: 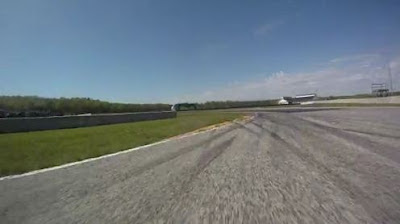 NOTE: The owner has removed the video from YouTube.

This happened in Turn 8 at Road America during the last road course event on the 2012 One Lap calendar. The CTS-V wagon had been flawless up until that point. You know Dubler must have had no brakes to turn the car in such a suicidal way. Dubler attempted to brake for the turn and the brake pedal went to the floor without returning. Sensing he had no brakes, in a split-second decision Dubler cut infield of the turn to scrub some speed off and avoid hitting the outer wall head on. It's like cutting your own arm off to give yourself a chance to survive. Pause the video at 0:23 and you will see that the car is intentionally aimed to get as close to the inside wall as possible, just missing the event photographer in white shirt on the left.

When the car came in contact with the inside curbing, the right front suspension (wheel, brakes, hub, part of upright) ripped from the chassis and tucked under the car, causing it to pitch up and into the gravel trap. The car then rotated 180 degrees, hit the wall, and flipped 4-5 times over the wall (the in-car cam broke free on the second roll). The CTS-V landed wheels down and amazingly, Robert walked right out of the car without a visible scratch. The car had no roll cage. That Robert survived the crash is a testament to the CTS-V's structural rigidity (even though the doors did open during the crash.) 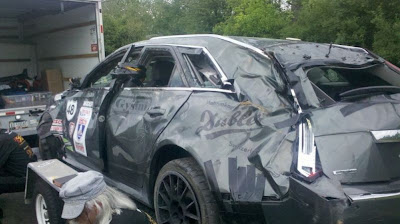 Coincidentally, the exact same thing happened to another CTS-V (this one a sedan), which rolled over the fence at Road America's Turn 12 during the 2010 One Lap event. That car crashed on the recon lap and it was assumed at the time that the crash was related to poor bedding of the pads to the rotors. It may be too much of a similarity with Dubler's CTS-V to chalk it up to coincidence. It is quite possible that there was a mechanical/electrical brake system failure due to a specific combination of variables (speed, pitch, yaw, etc.) Brock Yates Jr. was recently quoted as describing the condition as "ice mode" in the ABS system. In essence, due to the car's aggressive slip angles, the computer falsely calculates conditions specific to driving on ice and only allows a small percentage of the brakes to be applied, so the tires wouldn't lock up. 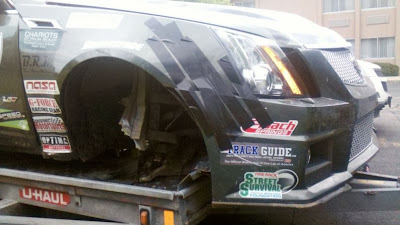 This "ice mode" mystery should be easy to resolve with the data logged in by GM's in-car black box, better known as OnStar. After two very similar and well documented crashes, shouldn't someone be looking at the speed, pitch, yaw, and ABS data logged in the final seconds leading up to the rollover? Robert Dubler was very lucky to survive this insanely scary crash. He would be relieved to know what caused it.
Posted by CT at 12:20 PM