A Lotus Gone Wild: How an A/C Leak Turned into a 400-WHP Monster - Part III

Here is Part III of the amazing 400-WHP, 2,000 LB Lotus Exige S built by a regular guy without any tuning experience, all done in a small garage, without a lift, and in his spare time. Part I of the series covered the background of the project and why the Toyota 2zz engine was not the best choice. Part II focused on the research that went into the motor and why the Honda K-motor seemed like an intriguing choice. Today's Part III covers some of the other critically important setup choices: supercharger, exhaust, and intercooling. Again, Chris is continuing the write-up in his own words -- 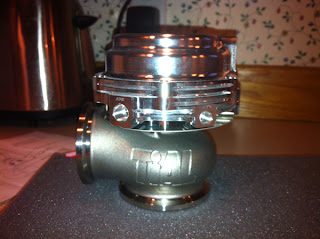 Is This Power Usable?
With the K20A2 –Rotrex C38 engine setup finalized, now I had to figure out the rest of the setup.

The benefits of running a Rotrex centrifugal supercharger were not only massive linear power, but also the ability to utilize it like a belt driven turbo. This includes cooling and plumbing. I didn't want to get into any type of custom bodywork for a larger tire fitment and I also wanted to avoid limiting the supercharger's output by running a bigger pulley to reduce psi output. Instead I chose to install a waste gate right after the intercooler on the intake pipe before the throttle body. This way I could control the max boost output through different waste gate springs or a boost controller. The only problem with getting this to work was getting the appropriate weld-end flange. You see waste gates come with SST V-band flanges since they are used on HOT turbo exhaust systems, which are normally made out of SST. I needed this same flange in aluminum since you really cannot weld SST to aluminum. 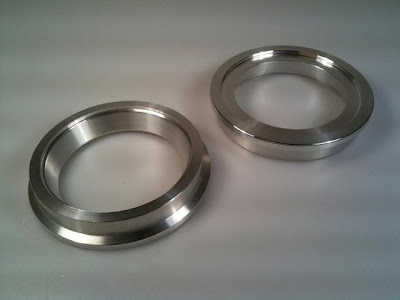 To pull this off, I figured I could just purchase a Tial MVR waste gate and sent out the supplied SST flange to have it replicated in aluminum. One more problem solved before the project even started! 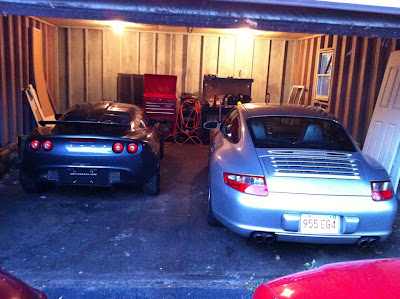 Here are the "luxurious" accommodations for all this complex work.
And this, by the way, is as clean as my garage ever got - right after
I picked up the Exige S and before any work on it had begun.

Engine Management - Wiring
The biggest thing that worried me about this project was doing the conversion wiring. Imagine trying to explain to the fire department that you just burnt your car to the ground because you thought an orange-stripped red wire was actually a red-stripped orange wire?? No thanks! Well, before having to worry about wiring, I had to decide which engine management system I was going to use. There are tons of options: Haltech, Motech, EMS. I chose Hondata’s Kpro. K-pro is basically a modified factory Acura RSX-S ECU that is tunable through a Windows based tuning software called K-Manager. This software also has some awesome features that are extremely useful to force induction applications. For instance, they have a boost control option that allows you to regulate boost by gear if you connect a solenoid to the wastegate. 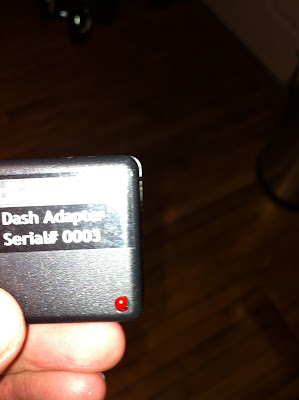 If I ran this setup, I could use the smallest pulley possible but limit the boost pressure in 1st and 2nd gear in order to gain the maximum traction without having to be feather the throttle too much in each gear. For instance varying boost by gear would allow me to run a max 300whp in 1st, 340whp in 2nd, and 400whp for the rest. This really makes the car more flexible for each application I can adjust WHP for autocross, the street, the track, and even the drag strip.  Also “most” of the K20A engine harness plugs right into the K-pro ECU with zero modifications, but there was still a good amount of wiring that would need to be sorted. This includes getting the Lotus Dash gauges to work with the new ECU. The Lotus dashboard and he K-pro ecu both operate under a different communication protocol and would require either a new AIM dash or some sort of converter.

It just so happens that Hondata actually makes a dash converter specifically for a Lotus/Honda swap. I know it sounds random but a K-pro co-founder is also a fellow Lotus/K-swap owner and came up with the dash converter and incorporated it into the K-Manager software I eventually ordered this and it arrived as serial number #3! (Awesome Job, Derek!)

Murray to the Rescue 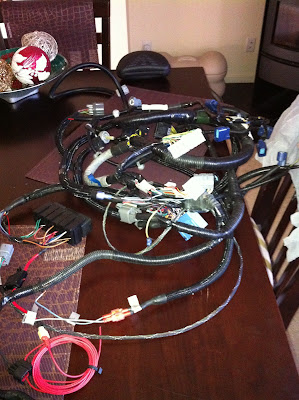 So after figuring out what would run the motor and the dash, I needed to figure out how to wire it! The universal wiring harness supplied by Innovative Mounts gets you pretty close but not 100% there. So that lead to more Internet research where I came across a Honda/Lotus build thread typed up by an awesome guy named Murray (owner of serial #2 Lotus Dash converter). Murray who happens to have a career in electronics and dyno-tunes cars on the side, was nice enough to draw up a full wiring schematic for the full engine swap and post it online. I contacted him and like most of the people that saw his build thread, bombarded him with questions on his engine swap. He certainly went out of his way to answer any of my questions and provide advice as needed. Even with the wiring I still felt a little uncomfortable with doing the wiring myself. In the interest of time I thought, it would be worth while to ask Murray if he would be willing to build me a plug-and-play conversion harness if I sent him the universal harness, the K20 engine harness, and the Radium Engineering Lotus ECU plugs. This would be a major time saver for me and would allow me to focus on the mechanical aspect of the build while someone else was working on the electrical side. Not to mention, it would save me from burning my car to the ground. Murray agreed to help me out and another piece of the puzzle was solved before pulling the stock motor. 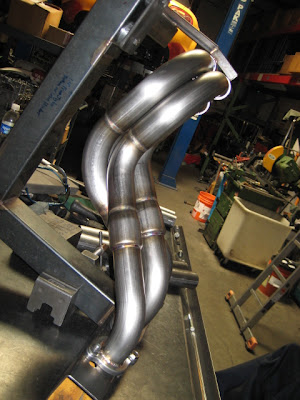 My initial thoughts were to have a custom-fabricated exhaust system made once I had the motor installed in the car. However that would definitely drag the project time frame out quite a bit. I also wouldn’t be able to fully test the car without it. I contacted Innovative Mounts to find out more about the exhaust done on their prototype car and they turned me onto Hytech Exhaust. Hytech turned out to be experts on both the Honda K-series engine’s as well as building custom race exhaust systems for them. It just so happens that Hytech had a hand in building the K-powered Arial Atom that now sits on top of the leader board on Top Gear USA. At that point I knew there couldn’t possibly be a better place to fabricate my exhaust. I spoke with the Hytech owner John Grudynski and he had the exhaust jigs for my Lotus/Honda and access to Innovative Mount’s prototype exhaust system. Essentially he would be able to build my exhaust without my car in hand and allow me to work on the engine swap in the meantime. 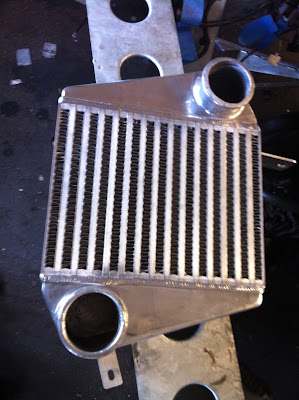 I really wanted to do a water-to-air intercooled system for the rotrex charger but that would have been a ton of custom fab work. Instead I thought I would see if there was an existing a/a intercooler from a Lotus aftermarket supercharged kit that I could integrate into my Honda/Rotrex swap. The only one I found with a n intercooler that could work was Vision Function. They had a nice bar and plate intercooler that would work perfectly. I contacted Jermaine and they agreed to let me use their intercooler without having to purchase the entire 2zz supercharger kit.

Now, I wouldn't have to fabricate my own intercooler and instead I could just use theirs, which fits nicely under the driver's side cross bar. The only problem was how do I connect all the piping together. With boost pipe you want as little bends as possible, and also minimum silicone hose connectors as they can be prone to leak boost or even blow off under extreme pressure levels. Since this was a custom build, the intercooler piping and further aluminum work would require some help. I don’t have the equipment to cut or grind aluminum tubing let alone weld it. So, I looked to Eurotech Advanced Automotive for advice and assistance. Bill Pfister who is no stranger to building just about anything you could imagine for a Porsche racecar, agreed to help me with the fabrication portion, including the aluminum welding if I decided to take on the project. 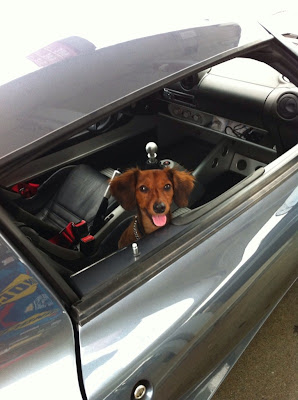 My dog Dash has kept me company throughout the project.
He loves the new setup, especially the first- and second-gear pulls
with the windows are down!