We asked which street-legal tires you like best and the final results revealed a clear winner: 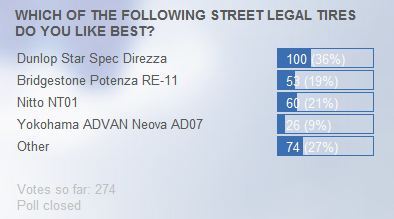 1. The Dunlop Star Spec Direzza got 36% of the vote with a comfortable lead over any other tire in the poll. I know from experience that the Direzzas were good for nearly 2 seconds over the Michelin Pilots on a 70-second autocross course. I have used 3 sets of them so far and they are equally good at autocross and track. At the autocross, the do not need a lot of heat to work at its optimal performance level. At the track, they remain fairly consistent after a fast 30-minute session and only get marginally greasy on excessively hot days. They are long-lasting and reasonably priced to boot. This really has been the best all around street performance tire for the past few years. As one E36 M3 owner summed up his experience with the Direzzas:


2. The Nitto NT01 was ranked second with 21% of the vote. This is a street-legal tire very much in the Michelin Cup category, and the best part is that you can swap wheels and tires the night before the event and drive with them to the track. The Nitto NT01s will take all the heat you can throw at them. Be warned, though, that it makes an absolutely lousy autocross tire, as its optimal temperature range is very high. Even if you had a dual-driver "tire warmer", it won't heat up enough to be competitive at the autocross. It shines at the track, though. I have a set of these for my Z4 M Coupe and in back to back comparison runs in the dry at Watkins Glen, the Nitto NT01s were good for approximately 1.5-2 seconds per lap over the Direzzas.

3. The Bridgestone Potenza RE11 was ranked third with 19% of the vote. It came out 2 years after the Direzzas, was sold at a significant price premium over them (nearly 50%!) in the beginning, and was very close in terms of performance. Its dry traction may be marginally better than the Direzzas but at that price premium, it was not worth the price of admission to most drivers and it never caught on with performance driving enthusiasts quite like the Direzzas did.

4. The Yokohama ADVAN Neova AD07 got only 9% of the vote. This has not been a very popular tire with performance driving enthusiasts and part of it is because this model is getting old. Firsthand reports on the next generation ADVAN Neova AD08, which was released this Spring, are indicating that this is the best street tire available right now and it has better performance numbers  than the Direzzas.

5. Other tires combined got 27% of the vote. While it would be nice to get a breakdown of that number, there are so many other tires to consider that any one of them would probably have been ranked in the single digits.

Toyo Proxes R1R and R888 would have been worth adding to the poll as well. They are very popular with the track crowd. We will have to run a new poll with these included to see how they will do. Let us know if you feel there are any other tires worth considering for the next tire poll.

Related posts:
At the Polls: Best Sports Car for Street and Track
Posted by CT at 10:39 AM