Here's a very interesting video of a Lotus 2-Eleven going off at 120 MPH at Spring Mountain.

Hat Tip to Chris C.
At first glance it looks like the driver was in control and the rear of the car came around somewhat surprisingly. Watching it in slow-mo, it seems to me that he turned in just a tad early and then lifted, which is what caused the rear to come around so fast. This is the frame that I think captures the slightly early turn-in at 0:24, just before the rear stepped out and the driver started correcting: 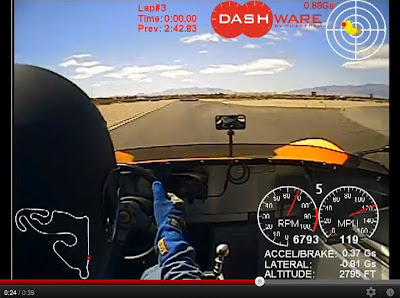 Check out how much further the darker race line goes in front even though the wheel is already moving to the right. Do you think he turned in early and that's what caused the off or maybe he hit an oil patch at that point?