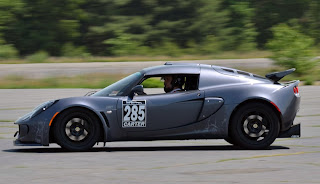 Ever wanted to do something so crazy and jaw-dropping, you couldn’t even tell anyone form fear they would try to stop you from doing it? Like launching yourself in a cask over the Niagara Falls. Getting up to highway speeds on a skateboard pulled by a car and then just cruising until you hit something? Build your own rocket and launch yourself into space?

Or tearing out the engine from a Lotus Exige with only 15K original miles and swapping it with another 4-banger just .2 liters bigger? Chris did that and a lot more along the way. Here is the amazing story of a regular guy (in his own words) building a 400-WHP, 2,000 LB Lotus Exige S in his own garage, in his spare time, on an aggressive timeline and a tight budget  --

About Me
My name is Chris and I love cars. Over the years, I have owned a Porsche 997 S, VW Corrado VR6, Audi A4, MK2 GTi but I have had very little experience working on them. I've done maybe 4 brake jobs, changed 2 alternators, a few competition stereo systems, a timing belt once, and really just basic maintenance for the most part. I've always wanted to build an insanely fast car and learn every detail about it but I never had my own garage to do it in until now. I’ve wanted that feeling of doing my own big project out of my own garage, you know what I mean? 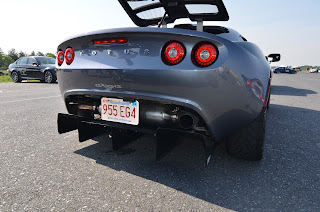 My day job involves running an instrument and valve service center center where we manufacture and repair large industrial automated control valve assemblies on extremely tight timelines. These assemblies are used in major power plants throughout New England. These types of projects and requirements require thinking 4 steps ahead and solving problems before they happen. All of which involves machining, outsourcing, logistics, you get the idea.

I didn't tell many people what I was up to with this huge project because it was my first time doing something like this and I didn’t want to hear all the negativity thrown my way. If I break my own neck doing it, it’s my money and my problem, so sit back and enjoy the show. 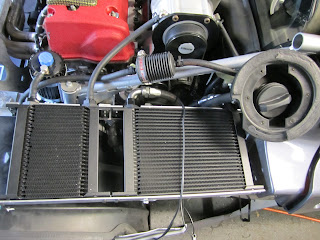 It all started out with an A/C leak. I put the Lotus away for the Winter and took apart the front clam in search for the A/C leak. I ordered some custom fittings to pressure-test the A/C lines and condenser, which took FOREVER to come in. While I was waiting for these, I ended upgrading the radiator that would eventually leak due to the poor factory design. I also upgraded the brake lines to braided stainless steel ones. Most of all, I spent a lot of time doing mods research on the internet. 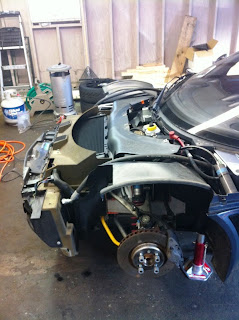 The original plan for the Lotus was to change out the blower for a bigger intercooled TVS charger. However, in order to reach the full potential of the TVS upgrade, the whole long block would need to be upgraded… including pistons, Nikasil coated cylinders, valves, springs, port & polish, etc. Not to mention that approach would lead to going through more trannies than Peewee Herman.  Failure at that power level would be immediate but available tranny solutions were still very limited.

One solution would be to upgrade the gear sets but the failure rate was still fairly high and not acceptable budget wise. Quaife has a fully sequential tranny option but that would require the Exige to turn into a dedicated track car and eliminate the purpose for the project all-together (not to mention $10K extra). The final tranny improvement option would be to "upgrade" the whole tranny to an MR2 turbo 5 speed since it has massive gears and known to be bullet proof but seriously -- who wants a 5 speed?!? This option was also 5K plus gear set upgrades to modify the undesirable long gears to a close ratio gear box for motorsport use. After sniffing propane heater fumes for a few weeks, my judgment might have been somewhat impaired.... Yep, this A/C leak was about to get way out of hand!

Up to 10% off exclusively through OneHotLap.
Details
Posted by CT at 11:56 AM