On August 12th this year, I raced my naturally aspirated 1995 BMW E36 M3 at the Pikes Peak International Hillclimb in Colorado. Competitors came from all over the US and the world: Russia, Luxembourg, Switzerland, Australia, Japan, and France. I raced in the Time Attack division (street cars modified for racing). 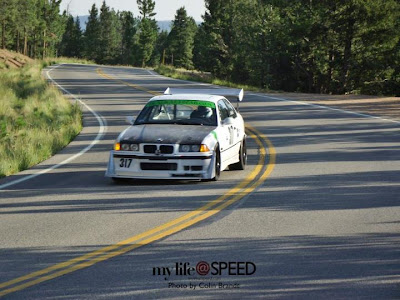 Getting There
I drove from Massachusetts to Colorado in two and a half days, towing the BMW on a car trailer with my Honda Odyssey minivan. Towed weight was about 3800 lbs including car, trailer, and tools and tires. Another several hundred pounds inside the van, all up weight close to 9000 lbs. Driving to Colorado at about 75 MPH, the Odyssey averaged 15.3 MPG. Driving from Colorado to Massachusetts, the Odyssey averaged 18.9 MPG. Arrived in Colorado on Monday morning, worked at Mitch William's shop to fix up a few minor items on the car, then to Mitch and Alissa's house to get vinyl graphics cut. The car now looks more like a race car! Drove to the Lone Duck Campground on Route 24 just near the Pikes Peak highway road. Got to sleep around midnight. I also picked up a cold which meant I was sick all week for practice and still sick on race day.

Tuesday - Registration and Technical Inspection
I had not looked at the Pikes Peak road in person yet, so Tuesday morning I drove the road in the van. A pretty amazing road and the scenery was just outstanding. Hurried down the mountain at slow tourist speed, got to the campsite by noon and towed the BMW down to Pikes Peak International Raceway which is about 40 minutes away. Arrived just in time for registration and tech inspection for Time Attack. 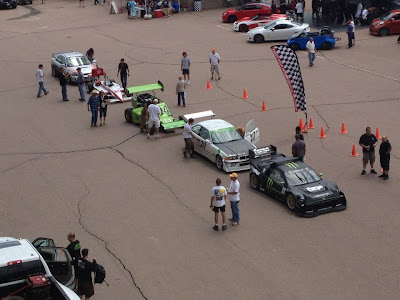 In line for tech

I was sweating that something would be wrong and require fixing; no worries. All good, except there was a lot of discussion about harnesses (seat belts) and the age limitations on SFI and FIA belts. Many people with FIA harnesses could fail the inspection because PPIHC (in 2012) would only allow belts that are under two years old. FIA belts are good for five years...

Rookie orientation was uneventful; an experienced Pikes Peak car racer gave a very good overview of the tricky sections of the course. The motorcycle racers got their own overview from the bike perspective.

Practice is all over by 9:30 AM. The first day of practice for the Time Attack division was the upper section, from Devil's Playground to the summit. 13,000 feet to 14,100. No familiarization run, just straight into fast practice runs. I had little hope of doing well in my division as almost every other car is a turbo. Rhys Millen's Hyundai has around 750 HP. For me, the drag up to Cog Cut turn was really slow, my M3 is down to about 140 WHP. But I took the corners pretty fast. I didn't find the Wednesday practice results until Qualifying on Thursday morning, but was really happy to discover that I placed fourth in Time Attack out of 20 cars with a time of 3:06.4


Funny seeing the 20 MPH signs on the right when you blow by at 5x that speed!

Thursday - Qualifying Lower Section
Today was practice (and qualifying) on the lower section, from the start line to just below Glen Cove. My first run went very well, no mistakes, and felt pretty fast. I again surprised myself and placed fourth in Time Attack. On my second run, I went off the road at the Sump, three corners before the end of the section. The back of the car stepped out rapidly (oversteer) and I tried to catch it but the rear wheels slid into the ditch. The car rotated and ended up facing downhill. I managed to get it out of the ditch without having to red flag any cars. 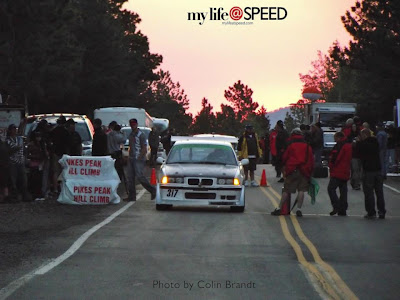 After looking over the video, I believe the reason I spun so rapidly was because the left rear tire was on the double yellow lines, which are extremely slippery. The bike riders had talked about this but I didn't think it would affect the cars so much. Most of the damage was to the exhaust. Much thanks to Cyrus who cut out the exhaust at the middle of the car and welded on a little section to point at the ground. Thanks also to Jimi and TK for getting the welder for us and helping with stuff. The car was fixed up ready for Friday practice, a little louder, a little lighter, and a little more bent! I had worried a lot about not qualifying, since the Time Attack field is almost exclusively turbo cars. But my first run was good enough for 7th in Time Attack with a time of 4:44.338 so I'm racing on Sunday! 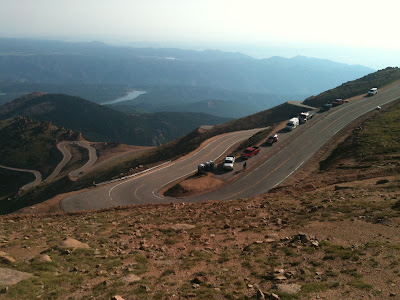 The other cool story from qualifying was Rhys Millen congratulating me for being quicker than him around the final 180 degree corner in qualifying. Rhys' dad, Rod Millen, had a radar gun and was checking speeds. Phillip Thomas wrote this in Hooniverse:

Day two of testing was held on the lowest section, from the start up to Glen Cove. When the cars started rolling in, I noticed a guy on the last corner with a radar gun. Curious, I walk over to go check him out after tire temps were done. Brianne, Rhys, and Jamie Melhuish in his ’95 M3 were the last cars to come around. Out of curiosity, I ask him about the cars.
“Ah, yeah, the red Subaru was 53 mph”
“What about Rhys?”
“The same, actually, 53 mph”
At that point the white M3 comes around,
“And…. 57 mph.”

So I posted the second-quickest speed through that corner out of all cars in Time Attack and Unlimited divisions (not sure about Open Wheel), only David Donner in the Palatov was 1 mph faster.

Related posts:
Pikes Peak International Hillclimb in a BMW E36 M3 - Part II
Pikes Peak Car Falls off a Cliff - Not for the Faint of Heart
Pictures of the Pikes Peak Car That Fell off a Cliff
Stuck Throttle in Fifth Gear: Zero-to-Crash in Fifteen Seconds Flat
Record Breaking Run at Pikes Peak 2011

Up to 10% off exclusively through OneHotLap.
Details
Posted by CT at 12:11 AM