Here is Part II of the series. If you missed Part I, you can catch up here.

Friday - Practice Middle Section
Up at 3 AM. The middle section starts from Glen Cove and runs to Devil's playground. The Honda Odyssey towed the M3 on the trailer up to Glen Cove at 11,440 feet. No worries. First run was OK, finding it hard to get around the hairpins. Front end grip is pretty good but the inside rear wheel is spinning a little, though not as much now since we stiffened the front anti-roll bar. This section of the course is hard for my car since it is a stop/start drag from each hairpin up the steepest section of the hill.

My second run was a little quicker but I had a really scary incident. I came flying into a hairpin and stepped on the brakes, but not much was happening. I fought the brakes and steering, overshot the apex, and finally got the car turned. The rest of the run was alright but the overshoot scared me. It turned out that one of the open wheel cars had dumped oil on several corners. My last run was better and I eventually placed 10th out of 20 cars, my time was 3:11.47

Friday Night
Went down to Colorado Springs on Friday night for Fan Fest. Definitely an experience! Over 35,000 people hanging out on 10 closed-off city blocks. 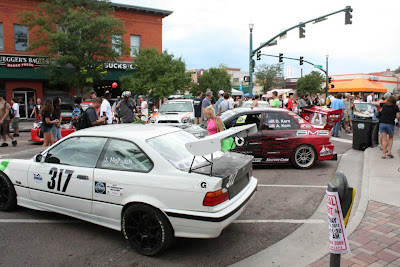 Showed the M3 from 5 PM to 10 PM then packed up and back to the campground. Some really cool cars there including Walter Roehrl's Pikes Peak winning Audi S1.

Sunday - Race Day
Up at 3 AM, through the toll gates at 3:30. We had already set up the pits with the race car and trailer on Saturday, so we just drove up in the Odyssey van, myself, Cyrus, Jimmy (Cy's dad), and the two dogs. Went to sleep again for a couple of hours, then up for the driver's meeting at 8 AM. 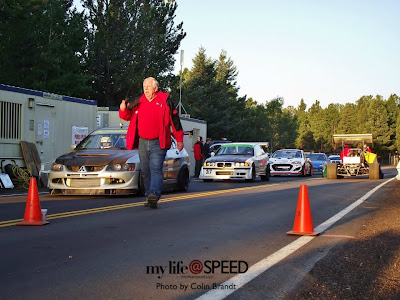 All the bikes raced first. Greg Tracy and Carlin Dunne had an epic duel on the 1205 Ducatis, each breaking 10 minutes, with Carlin winning by 6 seconds with a time of 9:52.819. The Unlimited class chose to run first of the car divisions and they had a nice clean road and dry weather. Unfortunately a lot of the unlimited cars broke including the top qualifier Jean Philippe Dayraut in the Dacia Duster. David Donner in the Palatov came through for the win at 10:04.652.

The electric car class was really interesting. A good battle among the big factory teams. However Monster Tajima's car filled with smoke at the start line and he ran only a couple of corners before shutting it down. He was not at all happy. Elias Anderson raced a home-built lightweight electric car to 3rd in class and 13th overall with a time of 11:00.857. The fastest electric was the Toyota/Radical coming in at 10:15.380. 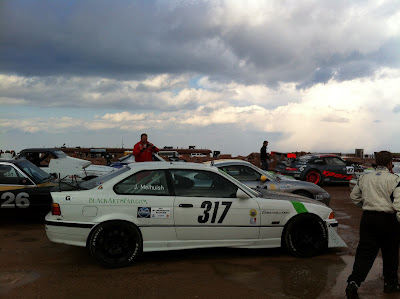 The Open division Porsche GT3 R driven by Romain Dumas (Le Mans winner) was really fast and came in at 9:46.181. However now the weather started rolling in, with rain drops at the summit. Quite a number of cars had crashed or broken, bringing out the red flags often and requiring re-runs for drivers. This slowed down the event considerably. Thunder clouds, lightning, and light rain started at the summit and began working down to lower elevations.

The Time Attack class
The Time Attack class started and Rhys Millen had a dry road until the Boulder Park near the summit where he hit the wet. Rhys still put in a time of 9:46.164, good for the class win and the overall win, just beating Dumas by 17 thousandths of a second. By the time I started, reports were of rain and wet roads down to Devil's playground, or maybe down to the "W's" - the switchbacks below Devil's Playground. I was given the option of changing tires, but I chose to run the Hoosier Radial slicks (with a single circumferential groove), good for dry and damp roads, but not for running or standing water.

As I started my run, I felt that the steering wheel was off-center. What's wrong? Did I bend a tie rod? Is the suspension suspect? I just kept going, not using the 9 o'clock / 3 o'clock hand position, but simply holding the wheel rim wherever I needed. I put in a good run up to Glen Cove and then saw a red flag waving vigorously. I shut it down and waited. Apparently a car had gone off somewhere in the W's. It turned out to be a nicely-prepared Mitsubishi Evo driven by Jeremy Foley which went off just below Devil's Playground on a very steep hillside, it rolled at least 10 times. The driver was air-lifted by Medi-vac to hospital but luckily had little injury. The co-driver was taken down by ambulance, he was also not badly hurt. I drove back down for my re-run. At the bottom, I found that my quick release steering wheel was one notch to the left. Back a notch and the steering is all straight again! 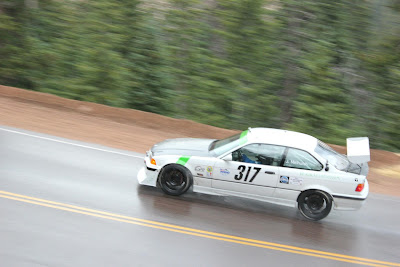 We had to wait for 40 minutes or more while the Evo drivers were evacuated. By now the weather had dropped rain all the way down to the Sump corner below Glen Cove. So two-thirds of the course was now wet. We were given the option to change tires. Only myself, Tim Hardy (BMW E30 325 with a turbo M50 motor), and Patryk Matecki (turbo Dodge Neon) stayed on slicks (A6's for Tim and Patryck). I made a very conscious decision to drive carefully; I wanted to get to the top! I didn't want to wreck. I was pretty quick on the lower dry section but when I hit the wet, I slowed down a lot. Even being careful, the car was oversteering, slipping and sliding on the painted lines, and generally a bit sketchy. I made it to the top without any mistakes or incidents. Shortly after at the summit, lightning was cracking in the sky and hail poured down covering the cars and road. Drivers on that run had really scary road conditions. 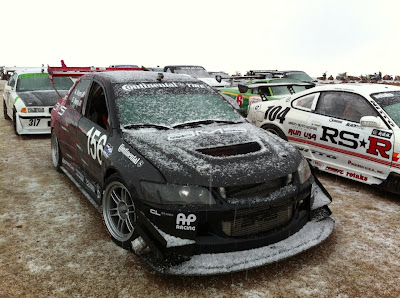 I don't think there was much advantage to having wet tires, except in a few sections. The Time Attack division had a bunch of people with close times, Brianne Corn (Subaru STi) at 12:01, Scott Moliter (Subaru Impreza) at 12:04, Fred Veitch (911 turbo) at 12:06, and myself at 12:09. We were all running in the same bad conditions. Looking at the times overall, people running later in the day were at a major disadvantage. Brianne came 5th in Time Attack and 61st overall (170 entries), I came 8th in Time Attack and 70th overall. In the lower section of the mountain that was dry, from start line to the Picnic Grounds, I was 5th in Time Attack, and even to Glen Cove with some wet roads, I was 5th or 6th. It was the wet roads and hairpins higher up that slowed me down. 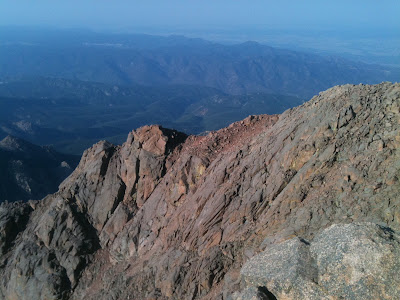 Pikes Peak is majestic!
However, I thought the most impressive drive was by Tim Hardy, a young guy from Colorado Springs who built his BMW E30 325 coupe with a turbo M50 engine, lightweight panels, wing, and was running right behind me in the same bad conditions (he qualified just slower than I did). Tim pedaled that thing up the mountain with a time of 11:35, coming in 4th in Time Attack, and a fantastic 30th overall, while most faster competitors had a dry road.

A Few People to Thank
The trip home to Massachusetts was uneventful, except for running out of petrol in Illinois. I poured one gallon of VP 109 Motorsport racing gas, $13, into the Odyssey and crept to the nearest gas station. 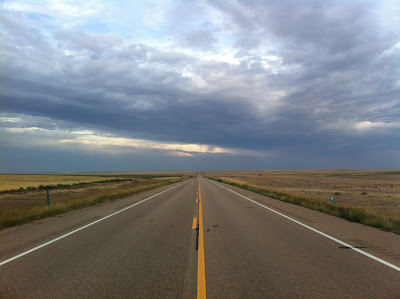 Somewhere in Colorado trying to get home.
Thank you GPS routing algorithm.

Thanks to all the PPIHC organizers for putting on a terrific event. Thanks also to Cyrus House (BlackArtsFab.com) for being Crew Chief at Pikes Peak, and to Jimmy House for helping with everything. Also thanks to race engineer Richard Strout (LEMD.com), Charlie Gerry (Six Star Motors), Jason Russell (VEMS), Bill Lockwood (Black Glove), and to Chris, Wilhem, and all the Burlington VT crew.  More thanks to Chris du Bois for Honda support, to Mitch and Alissa Williams, Dave and Allison Kern, Rick Cooke, and all my BMW CCA friends, and my New England Hillclimb Association friends! Finally, thanks to Jennifer and to our families for all their support over the years.

Pikes Peak is an amazing mountain hillclimb.  I will be coming back next year for sure.

Related posts:
Pikes Peak International Hillclimb in a BMW E36 M3 - Part I
Pikes Peak Car Falls off a Cliff - Not for the Faint of Heart
Pictures of the Pikes Peak Car That Fell off a Cliff
Stuck Throttle in Fifth Gear: Zero-to-Crash in Fifteen Seconds Flat
Record Breaking Run at Pikes Peak 2011

Up to 10% off exclusively through OneHotLap.
Details
Posted by CT at 9:07 AM