Alex Zanardi Is a True Hero! 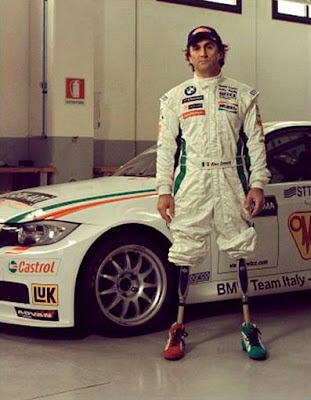 After all these years, I still vividly remember Alex Zanardi's formula car get t-boned at 200+ mph. It happened at the 2000 CART race in Germany. He had won the championship twice in the past but had a crappy car that 2000 season and things weren't going his way. This was the first race in a while that the car worked reasonably well and he came from behind to take the lead in the closing laps of the race. You could tell by the way he was driving that he was doing his best and really enjoying himself out on the track.

Zanardi was leaving the pits after a quick stop, got on the throttle a bit too aggressively at the end of pit road, spun his car, and crossed into the path of travel of cars on their hot laps. It was just gruesome to watch the accident and frankly, hard to imagine at the time that anyone would survive after his car (including the shell) broke up in two. His legs were severed, he lost 3/4 of his blood and had literally 10 minutes to live in that condition after the accident! It was remarkable that the doctors were able to save him with a rapid intervention!

His life since then has been awe inspiring! He was back racing in the World Touring Car Championship in a car with specially adapted controls and WON several races, has published numerous books, has gotten his own TV channel off the ground, won the New York City marathon's handcycling class, and just won a Paralympic gold medal!

Just take a minute and look carefully at Zanardi's expression in this picture taken at the Paralympics. Think about what he's been through and what this means to him. He was not even the favorite to win the gold here. As he has done many times in his life, he fought and came from behind, beat all the odds, and won! 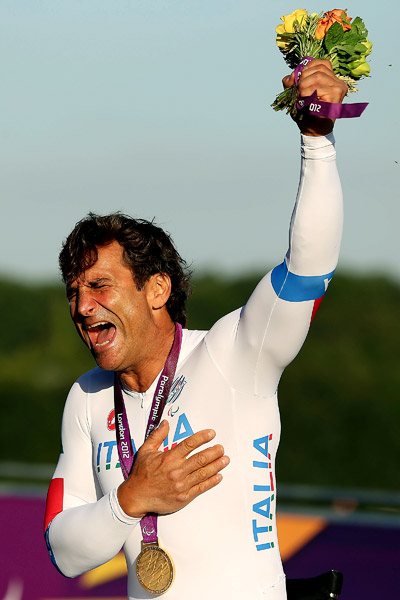 Alex Zanardi is a True Hero and an inspiration to all of us!
Posted by CT at 12:01 AM