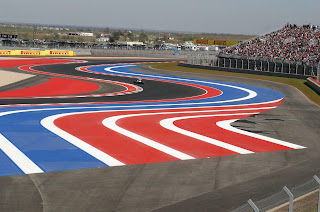 Formula 1 in the U.S. is like a white elephant: it looks pretty and interesting, we just don't know what to do with it. As Jeremy Clarkson tweeted today, "I'm very much enjoying the baffled look on many faces in the crowd at Austin." And according to Australian Mark Webber, last night he was complimented on his amazing English by a woman at the VIP dinner!

There is virtually no overlap between F1 and NASCAR fans: the Austin race was held at the same time as NASCAR's final race for the season in Homestead. Furthermore, the Austin race took place at the same time as the Cowboys played in Dallas and the Texans played in Houston. Ironically, F1 management's target audience for the U.S. Grand Prix is ... the rest of the world. 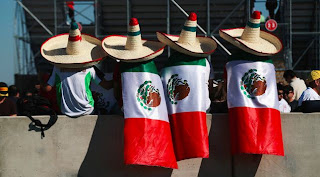 After a few fits and starts in the past, F1 figured that the only way a U.S. Grand Prix would work long-term is if we get some help from somewhere else: all of the Americas at a minimum, which is why the racetrack is called Curcuit of the Americas (COTA). Yes, that includes all of Mexico and South America. F1 supremo Ecclestone only agreed to schedule the race in Austin after he received Texas governor Rick Perry's huge financial commitment to building the infrastructure for the event with state funds. Governor Rick Perry has worked hard to promote the race and was even seen in the paddock at Abu Dhabi and other recent races. One of my other favorite stories of this weekend: governor Perry met one of the team principals in the paddock and after seeing "Pepe" written on his shirt, he politely introduced himself:


"I am governor Rick Perry. Nice to meet you, Pepe!"

To which one of the people in his entourage whispered in his ear that this was not the name of the principal. It was a team sponsored by Pepe Jeans. 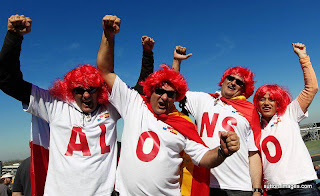 The crowds came in droves to see the race. Many journalists compared the turnout to F1's most historic track Silverstone, which packs 150,000 fans on a typical race weekend. This is truly remarkable for a country in which only 300-400k viewers watch a typical F1 race on TV!

And the racetrack? It is totally, absolutely, ridiculously amazing! I love the elevation changes, the wide pavement creating opportunities for many different lines through the turns, the uphill blind apex Turn 1, the esses, the 200 mph straightaways, and the wide runoffs encouraging risk taking. The white, red, and blue colors of the U.S. banner along the track look way cool and add a distinctive feel to it! 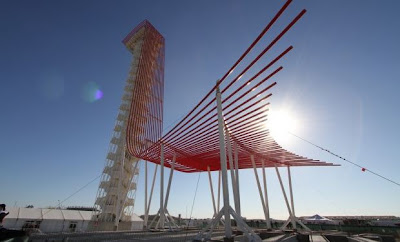 Austin's unique tower design is one of the track's signature attractions!

Texas is a perfect location for the U.S. Grand Prix, as it brings a uniquely American flavor to the event. Where else can you see SpeedTV's Will Baxton wear a cowboy hat and boots during the pit interviews? Let's just hope that 7-time World Champion Michael Schumacher's Mustang won't fail to start at the drivers' parade next time around, so he won't have to hitch a ride from Kimi Raikkonen as he did this year.

All drivers raved about the new track and how much fun it was to learn it. Studying the track on the simulators paid off immediately for those who had done their homework. Rumors were that Lotus driver Kimi Raikkonen had not studied the track on the simulator and he took a couple of practice sessions to get up to speed. However, he had caught up well enough by qualifying time. Proof positive that simulators pay off with getting up to speed right away, though! 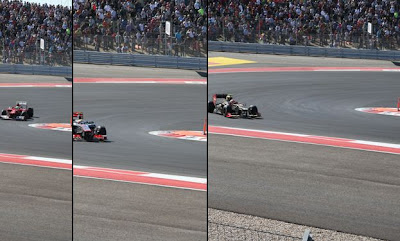 The wide pavement allows many different lines through Turn 1!
Courtesy of Car & Driver

The Austin race was thrilling with many exciting battles all around. You can check the race report and full results here. My intent was to take a more holistic view here and also to share some of the fun stories that you won't necessarily hear on TV or read about on other sites. Race winner Lewis Hamilton wearing Austin's signature hat!
It's a bonus that the podium winners looked more distinctive
than any other race on the F1 calendar!

Everyone likes to check out a new restaurant. But most people only go back if they like the food. Let's hope that Austin's popularity will continue even as the newness of the venue wears off in a few years. Hey, even if you don't like the race action or think that the race series is short on driver personalities, there's always the F1 pit girls! 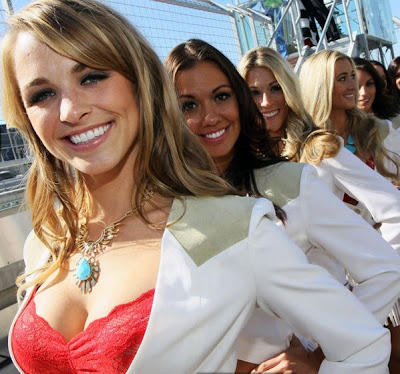