Dakar Rally 2013 - Still The Most Dangerous Race in the World!

The 2013 Dakar Rally starts today, January 5 in Lima, Peru and finishes in Santiago, Chile on January 20.

As always, there are four classes of competitors: cars, motorcycles, quads and trucks. Although this rally is extremely difficult for all classes, those running on 2 wheels are exposed to most danger. The Dakar Rally is probably the world’s most dangerous race and the 2012 event was no exception. The 21-st death of a competitor in the history of the event was recorded in the very first 2012 stage. Motorcycle rider Jorge Andrés Boero died of a heart attack following a crash just a mile before the finish line in Stage 1. In a separate incident during stage 2, an ultralight aircraft of a father-son duo watching the race crashed and both died at the scene.

You might be wondering why the Dakar race is named after a city in Africa but running entirely in South America. Well, it started out as a race from Paris to Senegal's capital Dakar in 1979 and even though it's seen some variation over the years, the route always used to pass through Europe and Africa.

Security in a nutty race like this has always been a concern but in 2008 the security threats grew significant enough to cancel the event. The following year, organizers found a new home for it in South America. They kept the event's name because of its popularity, just like a professional sports franchise that moves to a new city. (It makes as much sense as moving the Lakers from Minnesota to Los Angeles and keeping the franchise name even though there is barely any drinking water, let alone lakes in L.A.) At least South America has great deserts and very exciting terrain perfect for an extreme rally like Dakar.

Spread over 5,000 miles, the 2013 Dakar rally traverses the western side of South America, covering Peru, Argentina and Chile: 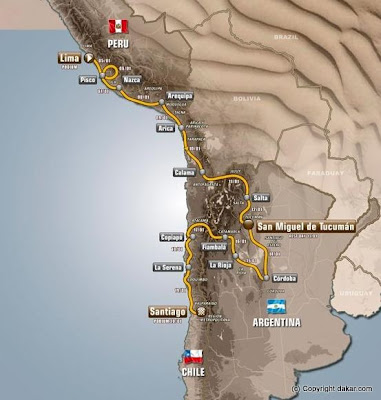 In spite of the risks associated with an extreme race like Dakar (or maybe precisely because of that!), nearly 200 teams are competing again in the 2013 Dakar rally. They will cover the 5,000 miles in only 15 days and finish this January 20 in Santiago, Chile. You know, if the event can be extended by a few days and it keeps moving North, we have very good deserts and mountains to offer Stateside too. It's good to keep that in mind in case the typically peaceful Argentinian gauchos start complaining about the race cars blowing by too fast! And Brock Yates can show everyone how to run a Cannonball-style event!
Posted by CT at 11:53 AM