Dunlop Direzza ZII: The Lap Time Comparison We've All Been Waiting for! 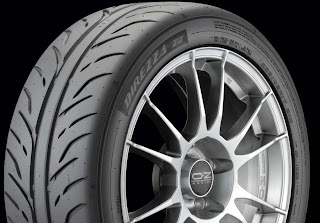 I have been using the Dunlop Direzza on both of my cars since the tires first came out in 2008. I've been through a few sets over many track and autocross days for these 5 seasons and always felt that they Direzza Z1s were as close to perfect as a street tire could get. So understandably, a couple of months ago I shared how excited I was about the new Dunlop Star Spec Direzza ZII tires scheduled to come out in early 2013. Yes, just as exciting as a date with Scarlett Johansson, even if she was ready to show us her intimate tattoo. I guess that makes me a total tire geek and somehow I'm still not ashamed of it...

Needles to say, I was thrilled to see the Tirerack finally post their lap time comparison between the outgoing Dunlop Direzza Sport Z1 Star Spec and their replacement Dunlop Direzza ZII!

Here are some more thoughts on the Tirerack review:

As expected, the lap times confirm an improvement of 1 to 2% in the dry (it would depend on the tire temp and number of laps). Even more impressive: these were the first wet lap times posted anywhere and the improvement there was over 3%!

3. There are four test factors to consider, which apply to both tires and probably put the test outside the typical set of assumptions that the tires would see at the track and autocross. My statistics professor always used to say that the average American has one breast and one testicle, so take these measurements with a grain of salt.
4. The Tirerack review discusses at length the car balance and rear slip angle in fast transitions. They also point out a much better turn-in ability for the front ZIIs. All of this tells me Dunlop has added more sidewall reinforcement layers to make the sidewalls even stiffer, which is really good news! You can easily see from the Tirerack video that the test car's rear was much better planted in transitions when the ZIIs were on the car.

5. During my "Scarlett Johansson" write-up back in November, I poked fun at Dunlop for the long tire name:

My only gripe is with the name. Really, Dunlop -- Direzza Sport ZII Star Spec is the best name you could come up with? How about SUPER STREET FIGHTER ALPHA TURBO X 3 SPECIAL EDITION (good one, Henry)!! And why the ZII switch to Roman numerals - are they going to the Superbowl or something?

While Dunlop kept the Roman numerals (the tire's introduction almost coincides with Super Bowl XLVII, so that's perfectly legit!), they have taken note of the long name and shortened the new tire to simply Direzza ZII. Good move, Dunlop! The market gets easily confused by long names.

6. I absolutely love this crushed cone shot from the Tirerack review! It's almost as good as our shot, except ours makes the cone look the size of a mountain!! 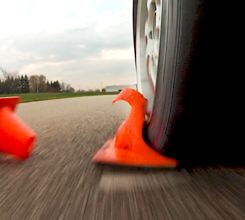 Stay tuned for more thoughts on the Dunlop Direzza ZIIs throughout the driving season.