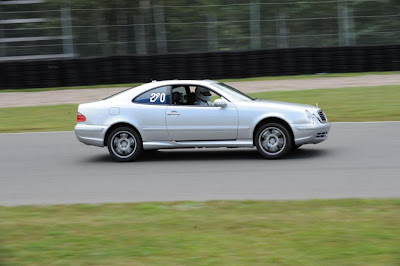 Hat Tip to Omeed A.

There are at least three things that don't look right with this picture. First one to point out all 3 of them here or on our Facebook page wins a OneHotLap t-shirt!

Other ...ugh...less obvious things:
4. Not big enough gap between the fender and the tire for a Benz under lateral load
5. The Benz star is still attached to the hood at this speed
6. He's going awfully fast for having numb Mercedes steering (as suggested by the driver's cousin)
7. His helmet is a Wal-Mart special (also suggested by the cousin - apparently, he knows the driver very well!)

Contrary to some suggestions, the hood is not open. The gap is due to the shot angle (or uncovered defect in Mercedes Benz workmanship)

A few people, including the owner of the car Omeed A. of "Iron Man" fame, got 2 answers right. After careful consideration... nah screw that -- since we had some pretty good laughs at his own expense with this contest, we will break the tie in his favor. Omeed takes the OneHotLap t-shirt.

Thank you everyone for playing! What a fun, creative bunch -- that thing HAS to be offline wherever it is, LMAO!!
Posted by CT at 8:00 PM