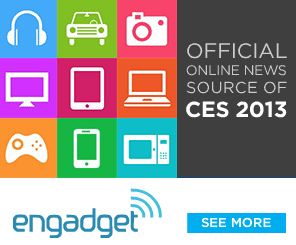 The 2013 Geekfest, better known as the Consumer Electronics Show (CES), is in full swing and ads for it have been popping up all over the Internet. At first glance, this ad for Engadget's coverage of the CES looks very much like the modern Windows Surface interface. (Ironically, Microsoft is not even attending the CES, which might actually make coverage for it more interesting.) The important question here is:

The flat panel screen, tablet, laptop, gaming controller, smartphone, etc. all look modern on the ad except for this crappy outline resembling a 1970's Lada. Just look at it and compare the two side by side: 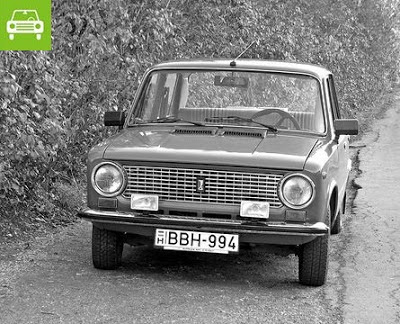 The resemblance is striking, isn't it? This is the car that Top Gear claimed was the best of everything: designed by the Italians, improved by the Russian, still made by the Egyptians, so what could go wrong with it?

Look, my geek friends, we car guys like gadgets as much as you do (well, almost) but our idea of a modern car is not a 1973 Lada with a chassis 2 feet off the ground, riding on skinny tires, with most of its weight outside the wheelbase and aerodynamics more commonly found in bricks. So maybe you could advance your car drawing by a decade for the 2014 Consumer Electronics Show and take it all the way to the 1980s? That would be huge progress right there! I can already think of a few cars from the '80s that would look great on the ad...
Posted by CT at 8:00 AM