Here is Part V of the amazing 400-WHP, 2,000 LB Lotus Exige S built by a regular guy without any tuning experience, all done in a small garage, without a lift, and in his spare time.

Part I of the series covered the background of the project and why the Toyota 2zz engine was not the best choice.

Part II focused on the research that went into the motor and why the Honda K-motor seemed like an intriguing choice.

Part III focused on some of the critically important setup choices: supercharger, exhaust, and intercooling.

Part IV detailed the Rotrex setup, the tear down, and pulling the motor out.

Again, Chris is continuing the write-up in his own words -- 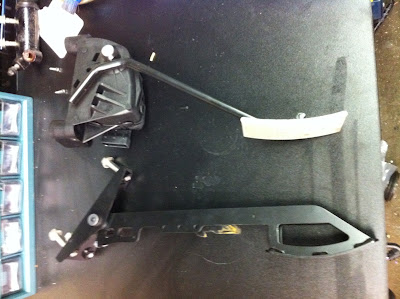 The side sills are almost a foot tall, so you can’t work under there with your feet hanging out of the door. You actually have to go in upside down with your feet straight up in the air! I got stuck for good under the dashboard for about 5 minutes because I couldn’t get more than one hand out to pull myself out of there. My girlfriend had to come out in the freezing cold to help me start the bolts for the pedal while I held the throttle pedal in place. She also thought it was a great photo opportunity… (see pajamas picture above)

I then had to install the Innovative throttle cable bracket underneath the dashboard to hold the cable in place. I recommend hiring a Yoga instructor to do this part for you! The pedal also needs a correct length and strength spring to assist with the return of the pedal to the resting position. I think I hit myself in the face with the spring at least 3 times trying to stretch it from under the dash onto the pedal. 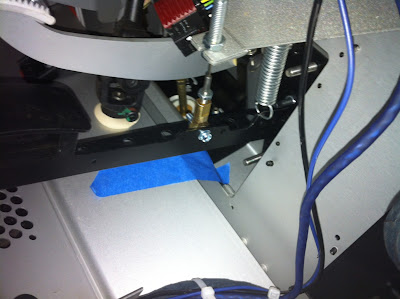 Custom Engine/Rotrex Oil Coolers
Another major part of the build would require a custom engine and Rotrex oil cooling system. The Lotus Exige has its own factory oil coolers, which are installed on the front of the car with oil lines running through the aluminum door sills (frame structure) to the engine in the middle of the car. The problem is that Lotus used crappy oil line fittings, which are prone to leaking. These are currently under investigation from Lotus and there is supposed to be a recall.

So I removed the entire factory oil cooling system and came up with something custom in the rear of the car. The K20A2 utilizes a water/oil coolant system, but because I would be using this car on the track and it is a mid-engine vehicle, I switched that system out for a larger air-air oil cooler system that utilizes a thermostat-controlled Mocal sandwich plate, Aeroquip fittings, Aeroquip Starlite hose, and Setrab oil cooler. The Rotrex S/C also requires an oil cooler, so I purchased another smaller Setrab with the identical width as the engine oil cooler. I fabricated some custom aluminum brackets to mount it up above the passenger side wheel well horizontally. 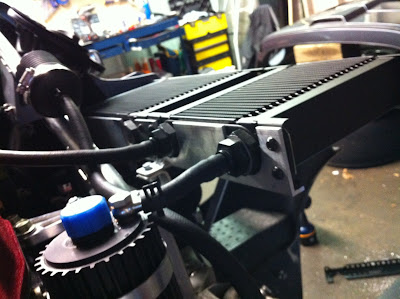 Looking back at it now, the mounting orientation isn’t exactly ideal. The coolers should be mounted vertically for optimum cooling and fluid flow. When doing something like this for the first time, you are bound to make a few rookie engineering mistakes, but I plan to install some puller fans to get some air movement across the coolers or change the orientation for them further down the road. 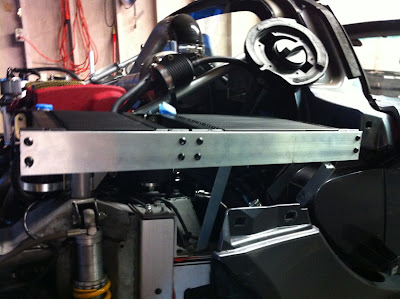 Another nice surprise with my engine swap was that the factory oil pan on the Acura motor had a crack in it! For a repair and track duty I chose to replace it with a high capacity baffled Moroso oil pan to assist with any oil starvation I might experience on the track. To keep oil out of the intake manifold, I went with a Peterson breathable catch can to vent valve cover pressure and customized it with an additional AN fitting, so I could run the PCV valve to it. 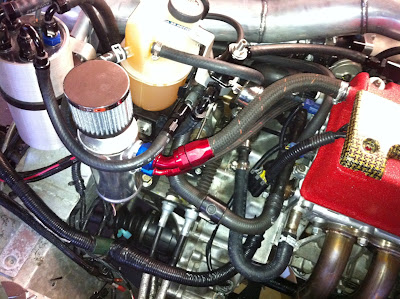 Fuel system
The factory fuel tank for the Lotus isn’t baffled enough for track duty and prone to cause fuel starvation. In order to eliminate this, I installed BOE Fabrication's fuel surge tank, which utilizes a Walbro 255LP internal fuel pump needed to achieve my power goals. It came with all AN fittings, an Aeromotive fuel pressure regulator, and all the wiring needed to run the extra fuel pump. For the rest of the fueling requirements I used a Karcepts fuel rail and Injector Dynamics 1000cc fuel injectors. 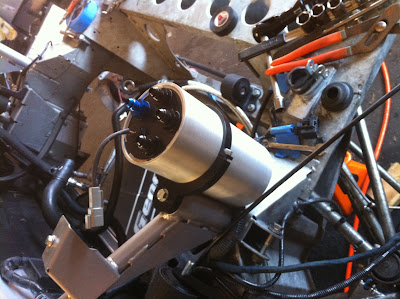 Surprises!
Well, a week or so went by and my transmission rebuilder gave me a call on his tranny evaluation. It turns out first and second gear needed replacement, as well as new synchros and sliders to go along with them. At first I wasn’t too bothered by the rebuild requirements because I knew it needed the rebuild and it still had the pricey Quaife Torque Biased Differential that could be reused. Then, the rebuilder really dropped the bomb on me… He said that he inspected the Quaife differential, only to find out it was not a Quaife but an OBX LSD (an expensive paper weight in my opinion!) At this point I was considering driving back down Long Island and paying the person who sold me the swap a little visit. Since I paid cash in person I was definitely screwed. I had to decide if I was going to put the OBX back in or replace it with something that would perform better at the track and autocross.

With the huge aftermarket support, I had quite a few options for both plate/clutch style LSD or a Torsion Biased Differential. I would have loved to use a KAZ or an OS Giken LSD, but these tend to require much more maintenance than a TBD. I have heard great things about this company Wavetrac but they were a few weeks out on their delivery. Same story with M-Factory. So I reached to Quaife for some technical advice. They offer a standard TBD and one specifically for drag racing. They advised that I should use the Drag Racing TBD that is built with stronger materials because it has a lower torque biased ratio. This would be ideal for a mid-engine rear wheel drive setup. So I had my tranny rebuilder order the Drag Quaife up and get it rebuilt. 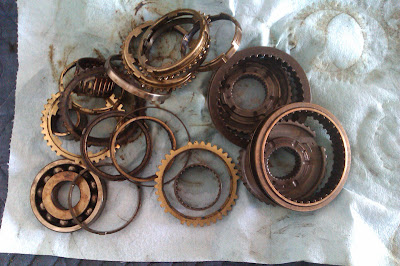 Engine
With the recent discovery of the Differential rip-off and cracked bell housing, I became suspicious of the complete long block as well. The last thing I wanted to do was put the motor in to discover that it also needed to be rebuilt. So, I called up my friend Kevin to see if he would come over and help me perform a leakdown test on the engine. Well, he came over, we performed the test, and found more bad news! The leakdown failed miserably. I don’t remember the exact numbers as I was too pissed to take note of it. 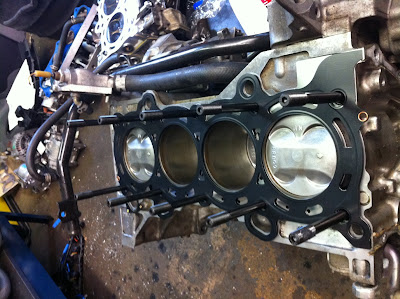 Kevin and I pulled the head off to inspect the block and head for signs of damage or excessive wear. The block looked great and the head looked ok, so we suspected a few bent valves were causing the failed leakdown test. So I got screwed on a cracked bell housing, Quaife Differential, and now a long block from the same guy. This had to be the end of it, right?? After sharing my results with Murray (the fellow Lotus/Honda owner doing my wiring), he informed me that he had a k20a2 head that had a fresh rebuild, including heavy duty SuperTech Valve Springs, SuperTech retainers, SuperTech keepers, pocket port, competition valve job, and all new SuperTech valves from his past build. Murray shipped out the head and I ordered a new timing chain, tensioner, head gasket, and ARP head studs to make it a fresh rebuild.A few beers after all the parts came in, Kevin and I had it all back together. As much as this hurt the wallet, it was good to know I had a solid block and a freshly rebuilt/sturdied head, ready for some boost. 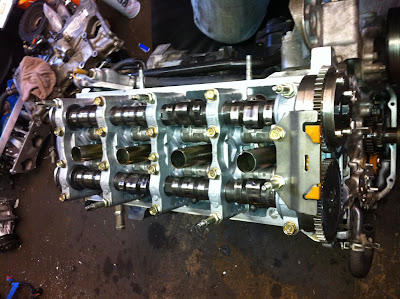 Clutch
In order for the car to be able to handle all the expected WHP and also maintain its street-ability, I went with a ACT XTSS clutch. It has a solid organic disc and uses an extremely strong pressure plate to attain its highly rated clamping power. I had expected that I would have smooth engagement but the clutch would be stiff. I was looking at quite a few 6 puck clutch setups, as well as some other twin disc setups but ACT seemed to have the best bang for the buck. It was also recommended to me from Hytech since these clutches are certified to meet SFI Spec 1.1. Now I was just waiting for the tranny and clutch to come in, so we could assemble the motor and drop it in! 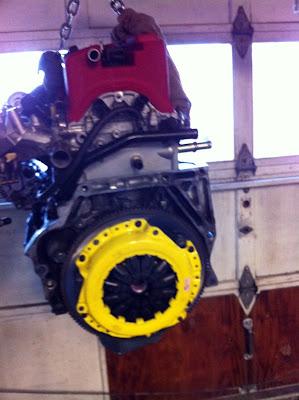 Best prices and selection anywhere!!
Up to 10% off exclusively through OneHotLap.
Details
Posted by CT at 12:22 AM