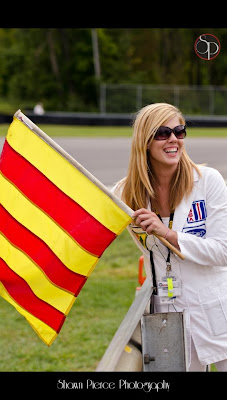 At SCCA Club Racing, Grand-Am, ALMS and similar events, flaggers get a free lunch. Well, OK, sometimes we get a new patch for our flagging shirt too. We are volunteers. We pay for our own SCCA membership in order to work. We spend our own money to travel hundreds of miles to flag and maintain a safe racetrack.

You spend your summer vacation time at the beach? We spend ours standing still for about 10 hours/day calling in track conditions, waving flags, putting out fires, cleaning up car parts and soaking up oily messes. Sometimes the drivers wave at us to say "thank you," and I would consider that payment.

Why we do it? We enjoy being an important part of the action. We have the best seat at the track other than the guys & gals behind the wheel. It feels good to help keep everyone safe, so that we can continue to watch and enjoy our favorite sport. It's a great way to make friends with similar interests. Also, there are opportunities to get hired for events such as track days or other car club events, where we can get paid.


So how did I get into flagging? At first I got into racing after starting with track days about 8 years ago at Summit Point. Eventually it wasn't enough; I had to race. I didn't have any money to run SCCA. My boyfriend and I discovered oval track racing, we both bought cars and started doing that. I wasn't very successful, maybe because I didn't have enough money to prep the car well, maybe because I'm not talented, I don't know, but racing made me broke as I suspected it would.

In 2011 I went to Baltimore with the ALMS team Black Swan Racing. I was fortunate enough to help on the crew during the pit stop. After the ALMS race was over, I found myself all alone for the Indy race on Sunday. Not knowing anyone, I hung out with a flagger named Ted who told me all about his job, how it was all volunteer, how he drove from GA just to work for free, etc. I didn't understand at all...

I had always thought that they had an awesome "job" getting paid to travel with the racing series... that stayed on my mind for a few months. Mostly, his passion for what he was doing was what really intrigued me. How could someone LOVE standing in the same spot all day without racing or doing whatever they wanted?!

Anyway, my last race that year, my car was banged up pretty bad and the engine died. It wasn't worth fixing. I wanted to save for another car to race. I thought, I'll try flagging and "save" some money for racing again.

I met a flagger named Liz (pictured on the left with the bulletproof bike helmet) at the Racer's Expo in Marlborough. She was super helpful and got me in contact with the flag chief. I started flagging right away, as soon as racing season started...

Last year I spent more money on flagging than I spent on my race car itself. Not what I expected!
I did flagging for SCCA and I also got a job at NHMS and flagged at track days. After I got the hang of it, SCCA let me flag for Grand-Am and ALMS at Lime Rock Park!

The little money I make working for NHMS barely covers my travel expense, water, and food for the day. After I started flagging, I finally understood what my friend Ted meant. 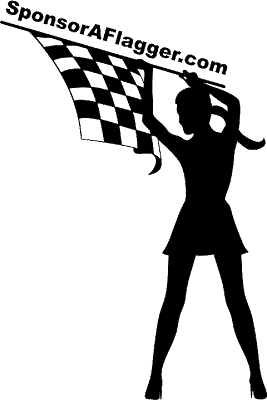 I thought about all the money I spent, how there are other flaggers who travel way more than I do on their own money, and I wanted to help in some way. Not specifically me, but I wanted a way to help all flaggers.  I wanted to start a site to take donations to distribute to pay for SCCA memberships (did you know that we have to PAY to flag?  silly, huh?), gas, travel expenses, etc... but then I couldn't figure out a reason why anyone would give flaggers money.

I was also concerned that if I asked for donations, I'd get the creepers who just want to give a blonde chick $. There are not many females in racing yet, so we get more attention for that reason. Not that it's bad, but I just didn't want to give the wrong impression. It doesn't help when you think that as a flagger, I have to work a corner...

So I decided to start the Sponsor a Flagger website to give people an opportunity to help and get something cool to keep. The commission I make on these items will help me get to more races. Buying one shirt will get me to my home track NHMS. If you buy two, then I can drive home as well! Imagine the possibilities! Drivers ask for sponsorship, so why shouldn't flaggers? It's for a good cause: You will be putting another flagger to work on the racetrack and helping keep everyone safe.