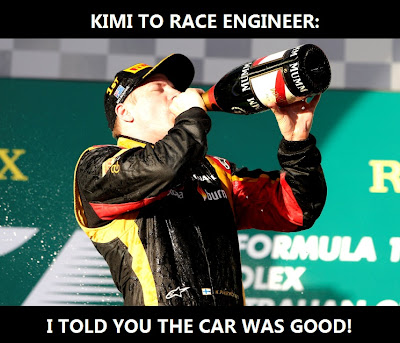 It was fantastic to see Kimi win. This is especially impressive considering his Lotus team has a fraction of the funding that the big manufacturer teams have! Not only are Lotus a tremendous outfit, they are also by far the most fun team in the paddock with one of the best and most fun drivers.

This is why we love Kimi: with 2 laps remaining in the race, a 10-second gap to second-place Alonso and running similar lap times, Kimi goes for fastest lap of the race. "Just in case it starts raining", he said when asked "Why?" at the podium ceremony. My type of driver!

"I told you the car was good!", he told his engineer over the radio on the cooldown lap. This on top of "Leave me alone, I know what I need to do" last season!

Podium ceremony was one of the best. Alonso and Vettel pop the champagne bottle open and start spraying it around like almost any other driver would. What's the first thing that Kimi does? Takes a big sip, of course. What's the second thing he does (while Alonso and Vettel are busy spraying their champagne on him) -- why, yes, takes a few more sips before you waste any of it of course. Vettel comes over and says something to Kimi. Kimi responds and his body language easily gives it out:

In other notes, McLaren looked so horrible, they even considered running last season's car before the race. Talk about a major waste of a big budget! And Williams looked downright atrocious. "Undriveable" is how their own driver Maldonado described the car. His engineer can't be a happy camper! What's going on here with the British teams?

And while we're picking on the Brits, a note on Hamilton's douchebaggery -- he was trying to defend his position in front of Alonso going into a heavy braking zone with a slower car. He locked up the brakes taking the inside line and was just a passenger for good 200 ft with Alonso 3/4 of a car ahead of him on the outside and about to turn in. How Alonso was able to see that in his blind spot AND react in a split second to stay on his line and NOT turn into him is some of the most amazing piece of driving I've seen anywhere. Undoubtedly, Alonso has the best racecraft of the current field and he's matured tremendously from his early days with Renault.

Here's to a fantastic season opener and more exciting races to come. Kimi is our man!
Posted by CT at 6:08 PM