GA-ALMS Merger from an Insider's Perspective: An Interview with Chris Dyson 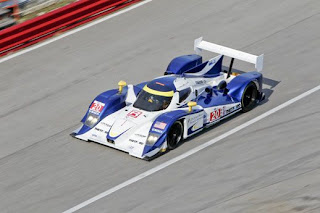 The upcoming merger between Grand Am and ALMS has created quite a stir in paddocks all over racing since it was announced late last summer. One team that has had efforts in both series is the Dyson Racing Team. Having competed early on in the Rolex Series, this team knows what it started out as and what it has become. In ALMS, the Dyson Team has had numerous victories as well since 2002 and claimed the championship in 2012. In my preceding article on this topic, some of the issues associated with this merger were discussed. If these issues are not handled correctly then we, (the worked up and excited motor-sports enthusiasts) will likely end up holding our stub in our hand, looking down and asking, "What the heck just happened?" But alas we are not the only ones who will be affected by this. After all the teams too get themselves all 'gussied up' for victories and our enthusiastic 'embraces' as we yell at our TV screens and from the stands. In this recent candid interview Chris Dyson discussed some concerns about the upcoming merger between Grand Am and American LeMans Series. Drivers and team personnel will also benefit and enjoy hearing this interview.

It is easy to see as the interview unfolds that this is not the easiest of times for people in sports car racing in America. Interviewer Bill Wood's familiarity with Chris is obvious and loans us the listeners candor we might not ever get at a time when many in the sport are unsure about what the future holds. In the discussion we gain insight into just what has to be considered for teams that are really committed to the sport. Chris is amongst the most credible of any to interview, having seen many rule changes in his career, in addition to the insights his father, Rob Dyson provided him from his many years in racing.


It is upfront and revealing. What is not said in words is revealed in voice intonation and demeanor. Listeners will gain insight into factors that affect the decisions team owners and managers will be making, and whether or not they will be able to compete with the passion racing demands. The storied Dyson Racing Team has given much to sports car racing in the US since early IMSA days. Teams like this deserve the consideration by the GA sanctioning body. It is competitors like this that have committed themselves to go up against the big boys of Audi, GM, Acura, Porsche and the like with privateer-level money.


Listen and enjoy. It promises to be a wisely spent 17 minutes. No doubt you will feel even more respect for those behind the wheel, behind the wrenches and behind the checkbooks that keep us on the edge of our seats and yelling in the stands.