Pictures and article by Patrick Morgan

For 3 years consecutive now, the lovely combination of Road America and an autumn day led me to call off work and head into Wisconsin for the weekend. The motivation to make that call was the annual Road America Drive for Babies track day. Hosted by SCCA and helping the Milwaukee chapter of the March of Dimes, it is a wonderful way of getting on track for a genuinely good cause. Being a native of Chicagoland for my life, and with my father being a CART team member, it’s natural that I would eventually go to this famous mid-west track, in fact I’ve been going to RA for 25 years now. I have many perspectives of this track: spectator, driver, corner-marshal. 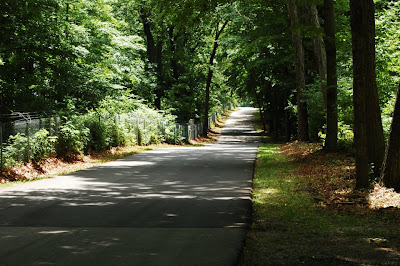 Spectating
I can’t really think of a better track than Road America for watching cars go flying through the woods. The 640+ acres that RA is situated on gives you an idea of just how many viewing spots there are. My personal favorites are turn 5, and the walk-over bridge just before the start/finish line. Don’t forget too that RA was voted as the best track food in America by Road & Track Magazine a few years back. If you go, it’s pretty much a requirement that you have a brat and a beer. SJB concessions in the main paddock is a great place, as well as the Lions Club atop the hill outside of T6. Their burgers, and corn on the cob are both top-notch as well. Plus from that vantage point, you can watch T5 and T13-14. Road America offers un-rivaled spectator access as well. Walk through the paddock at major events and it’s more along the lines of walking through a parking lot filled with the coolest cars you’ll ever see. Vintage weekends, like the HAWK (Brian Redman weekend) are jam-packed with historic IMSA, F1 and even NASCAR stock cars.

If one were to switch the subject momentarily from track days to modern racing, they would find that RA includes a huge variety of racing. Those of us inclined to 4 wheeled thrills can see the infamous SCCA June Sprints, the 2nd biggest amateur race in the nation, with over 450 cars entered that is part of SCCA’s “Triple Crown”. The third part of that is in the SCCA National Championship Runoffs, also held at Road America in September. The track also has the NASCAR Nationwide/ARCA series up there in June. While these kinds of cars may not be everyone’s cup of tea (we all know the bias Nascar can expose), from my experience, the racing is absolutely anything but boring. The big one is the combined Grand-Am/ALMS weekend. 2013 will be the last year that this series runs here before the merger. If the panache of the ALMS series isn’t enough, being part of something historic should be a little more motivation to go.

Well, now that you’re out at the track for a weekend, what to do? Want to camp at the track instead of buying a hotel room? No problem. Dedicated camping areas inside the track are over by the carousel and the facilities are all Kohler. The track’s vast size gives you quite the space for all activities you can include in your racing weekend. It’s pretty much like a race track built around a national park. I highly recommend bringing a mountain bike if you have enough space to negotiate the large amounts of land you’ll cover. 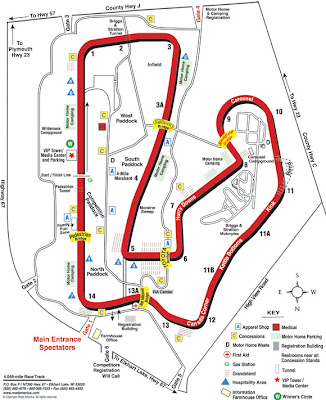 Driving the Track
Road America, being one of North America’s premier tracks has an unmistakeable aura about it. All the great names of racing have driven on this track, and they praise it as much as I do. At 4.04 miles long, it’s one of the longest tracks in North America as well. There’s a lot of breathing room on the lengthy straights. You can easily collect your thoughts, prepare for the corners and it’s really a great track to break down in sections and take as one big rhythm. I broke the sections down like this:
Section 1 – Start/finish to the Sargento bridge
Section 2 – Sargento bridge to Turn 7
Section 3 – Turn 8 to the Kink
Section 4 – Kink to start/finish
Heres how each of them are approached from the driver’s seat of this car. 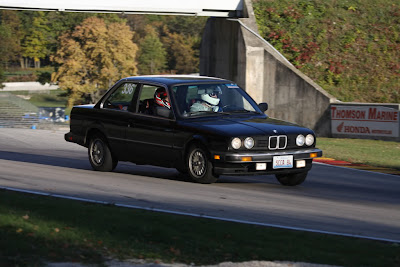 Section 1:
Flat out under the start/finish is easy enough, but the braking point I started using was the access road just after the flag station (official name for this station is 1-Alpha) off driver’s left. 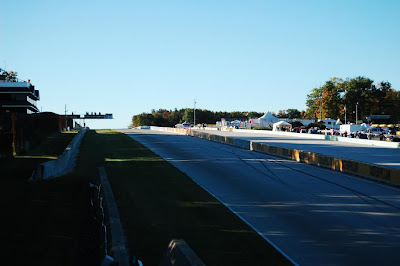 Hard on the brakes (even though I’m only at ~110 mph) and crank the wheel to the right with authority. Track-out on this is wide, but short-lived, as you want to be under the point of the Briggs & Stratton sign on the way down to Turn 3. There is a slight bend that makes up Turn 2, but it doesn’t really ever come into play if you position yourself correctly at the exit of Turn 1. Turn 3: braking and turn-in points on this bend are so much deeper than I had originally thought, so my perception of this corner was way off from watching many videos of on-board footage. There is a change in the surface of the track that I used as my aiming point. Nail this corner, and you know you’ve got it right. Final part for this section is going under the Sargento bridge. You want to be just right of the center when going under the bridge. 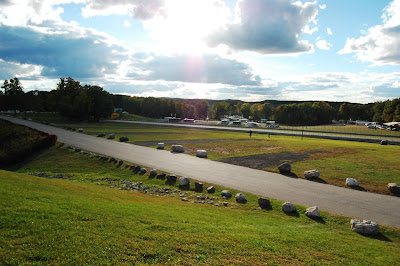 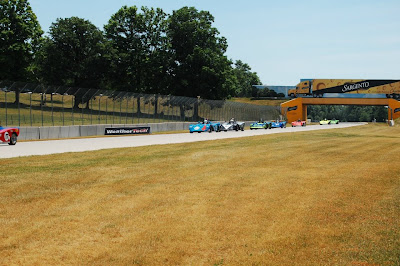 This is where it starts to get very technical. When coming out from under the bridge, your already carrying a good deal of speed, and you can NOT see where Turn 5 is approaching except for the number markers telling you how close you are to the corner. What I do, and it works reliably every time, is aim for the scoreboard way off in the distance which would be near Turn 13 (once on track, you’d know what I’m talking about). Aiming for that building takes you to the left of the track where it crests, beginning the down-hill approach to Turn 5. There is no absolutely correct way to take Turn 5 according to most. It’s such an unusual and challenging corner because you’re not only dealing with elevation change, but also a bit of a left bend after you come over the hill. Again, I just aim for the part where there is a change in the asphalt and use that as my turn-in. 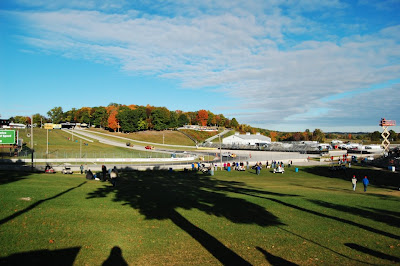 Remember, it’s just slightly more than a 90º turn, so you REALLY need to slow down (and watch your brakes for fade!). Power out of that turn and up to the Toyota bridge (soon to be re-named as Toyota has dropped their sponsorship for RA). Just past this bridge is Turn 6, a blind corner. Using the bridge as my guide, I’d be off throttle under the bridge and turn-in just a little after the bridge’s abutments. You generally aren’t carrying a whole lot of speed into this turn, so it’s fairly easy to feel out for the correct line (the picture above is me in Turn 6). Sweeping off from Turn 6, you transition immediately into 7. 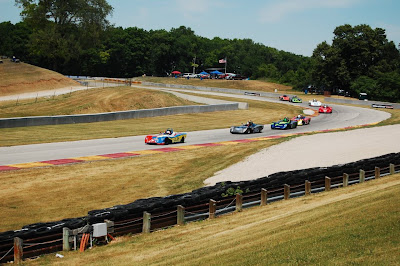 This seems like an off-camber turn, however, I’m told by track officials that it is indeed a flat turn but drops off, giving the impression of off-camber. Either way, it’s an easy turn to mess up. My car went light/loose at this corner, so I kept things in check by breathing the throttle early and getting back on power early with a later than usual apex along with using every inch of the race track. 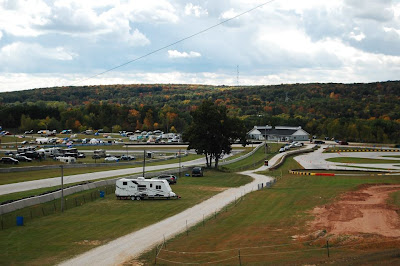 Now this is a bit of a longer straight coming off 7 into 8. I was shifting into 4th gear at later sessions when I was getting a bit more brave with higher speed going into 7, but 8 again is a very tight corner. It’s similar to 5, but much easier. There are some thin horizontal white markings on the track I use as brake references. Exiting this turn, I short-shift into a higher gear for the upcoming carousel. I enter this long sweeping turn right smack in the middle of the track, and slowly pull to the inside until I have about 2 feet of track to my right. The Armco on the right is a good reference point. There’s a part where it ends and I use that as an indication to pull into the apex, and track out right at a big black patch of new asphalt. There is now some serious speed being built up as you approach the Kink.
Section 4:
I’ll admit I am not brave enough to take the kink flat out. I breathe the throttle early and get on the gas early, ensuring my car is balanced through this perilous turn. There’s a whole lot less run-off area at this part and it’s not padded with tires. You don’t want to mess up here. Once through the kink though, you have another bit of breathing room. It’s 2 sorta-almost turns back to back that can easily be taken in one big swoop. Entering Turn 12 is the fastest part of the track for me. Here again, very hard on the brakes, another turn that’s over 90º and will catch out a lot of new drivers. There’s a vast amount of rumble strips on the outside of this turn (as there is in Turn 5) but you don’t want to take advantage of them, as they’re nasty. Exiting 12 is another place where I short-shift into 4th. It’s an uphill sweep to the left for 13. 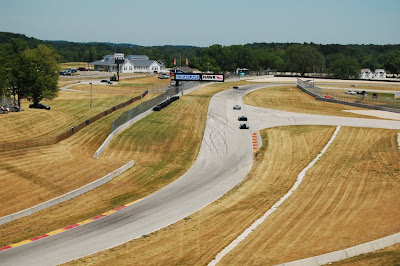 This corner has opened up since years gone by due to a new layout at Road America. The Kohler tunnel replaces where the bridge used to be (albeit a bit further down track), so it’s no longer a blind corner. It’s a fast turn regardless. I take advantage of every bit of track, and even use a few inches of the access road that links this back section of the track to Turn 5’s run-off. Then there’s a tree on the horizon I aim for, because just like Turn 5, there’s a bit of a small crest when approaching Turn 14 and it’s difficult to see your aiming points. The very last corner, aside from the unusual angle of approach, is a fairly easy one as long as you don’t turn in early. Remember, this is the last turn before the long front straight, and any speed you lose here will be lost over the whole length of that front straight. Once on the power, you have some time to look back and see how you did on your lap. You’ve got a little while till you reach turn 1 again. 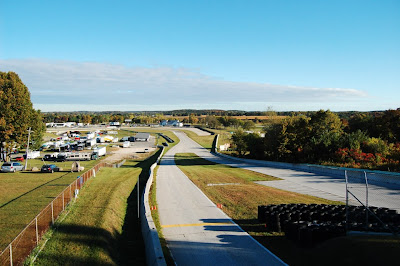 Road America celebrates its 58th birthday this year, and it sure has created a lot of memories for drivers and fans alike. It is one of those tracks that you really owe a visit to. Put it on your bucket list with the information below.

Find out more information on the Drive for Babies and remember to visit Milwaukee Track Days.
Patrick Morgan is a Chief Driving Instructor for the Chicago Region SCCA. See more of his writing at www.onetrakmind.wordpress.com. He is a lifetime veteran of all things automobiles and is currently running #02 in SCCA's Spec Racer Ford class. Patrick can be reached for questions at trackoutmultimedia@gmail.com. Follow him on twitter @pmorganracing.
Posted by Unknown at 10:51 PM