Dodge is on the attack. The just-released Viper TA is set to go straight after the likes of the Nissan GTR and Corvette ZR1, and despite the fact that all 33 of these Stryker-badged Vipers will come exclusively in the slightly informal "Crusher Orange" paint scheme, they are taking this game very seriously. It's actually aimed specifically at a different audience than the traditional Viper purchaser (if that's even an appropriate tag). Regardless, track days are the focus, and with revisions across every spectrum, it's looking like one hell of a car. So let's take a look at these changes and see what they mean for us. 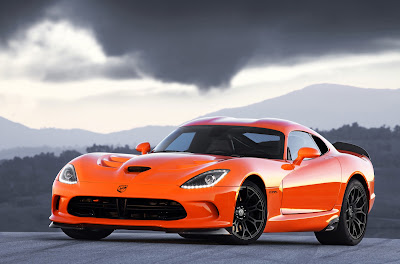 With the assistance of pro-racers and the SRT group from Chrysler, the Viper's TA package actually presents itself less than one year after the debut of the new SRT Viper. Lightness is the name of the game for the most part, but they've paid attention to important bits as well. A 50/50 weight distribution (something BMW and Miata owners loved to tout as being exclusive to them) is now also shared with the big beast from the US. Light-weight racing wheels are included in the package and various important bits of aluminum have been replaced by carbon fiber, making everything lighter and more rigid. Seats too were lightened and are now made of mass-reducing material dressed up in orange stitching. Those seats can also accommodate 6-pt racing harnesses if the owner later chooses to strap himself in nice and tight. They have the weight respectably down to about 3,300 pounds. So far, so good. 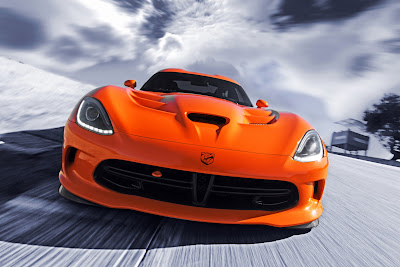 The Viper has a few impressive numbers that are the highest "in the world" as well. 600 lb/ft torque from the 8.4-liter V10 engine is the highest of any normally aspirated production engine. The other "largest in the world" portion is the contact patch. Dodge has chosen Pirelli P Zero Corsa's to provide the immense grip needed to reign in the engine. Controlling all of that mass is Bilstein Damptronic shock absorber units with variable damping mode. This mode is re-tuned specifically for the TA, giving even stiffer options than in the standard SRT. Unusually, nothing much has been said about brake upgrades, but when something is good, why change it? Brembo and SRT have already worked together to make stoppers that can handle more heat, but at the same time, dissipate it more effectively as well. That's something you'll need to be paying attention to when 640 hp is heaving the 3,300 lb car around.

They've taken a pretty careful look too at the Viper's aero, focusing mainly on the new front carbon fiber splitters and the rear spoiler. Don't be fooled by the "diffuser", though -- that's simply tacked on for aesthetics and it is non-functional. More changes have been made just for looks, including most of the interior revisions, where that orange stitching continues, well, pretty much all over the place. 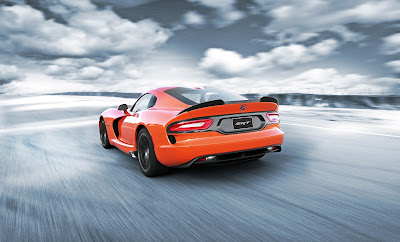 So what does this mean for us? All things considered, the Viper never has really been seen as much of a "track car" in the sense that a Porsche, Miata, or M3 is. The Time Attack name itself is a way to change the Viper's stigma and, well, if this is an indication of the direction that SRT is going, this track focused fitness-plan may get applied to other models in the lineup. Think of all the lighter, better cars this could bring to us! We can't wait to see the YouTube video of this brute chasing down a goal that's just over 7 minutes away at the 'Ring. Prepare your stopwatches, GM.

Contributed by Patrick Morgan
Patrick Morgan is a Chief Driving Instructor for the Chicago Region SCCA. See more of his writing at www.onetrakmind.wordpress.com. He is a lifetime veteran of all things automobiles and is currently running #02 in SCCA's Spec Racer Ford class. Patrick can be reached for questions at trackoutmultimedia@gmail.com. Follow him on twitter @pmorganracing.
Posted by Unknown at 8:00 AM