The French Have Le Car and the Italians Have LaFerrari!

By now, you have undoubtedly heard about Ferrari’s new flagship supercar, LaFerrari, and hopefully you've seen its cool introduction:

This is THE Ferrari, the "mother of all bombs!" It has a hybrid setup that includes Ferrari’s 6.3-liter V-12 engine and a seven-speed dual-clutch box with its KERS hybrid setup to boost output and lower emissions. It has two electric motors, one for the gearbox to send drive to the rear wheels and the other to take some of the load off the engine by powering auxiliary devices.

The car  looks stunning and it is likely to be the fastest around a racetrack of all recent supercar introductions. Fantastico !! Which leaves us only one thing to pick on: its name! See, The French Have Le Car and the Italians Have LaFerrari! And Americans have the F150, which also happens to be LaFerrari's chassis code. So LaFerrari is not so bad. As Dan Neil from The WSJ posted, it could have been called LaGhey. He also went on to write:

I wonder why not the venerable, and technically accurate, "bimotore"? La Ferrari sounds like something on the menu at a waxing parlor.

Touche, Dan! I'm sure soon enough, somebody will come up with a La-La-La--La-La-Ferrari jingle on YouTube that will inevitably have Vespas, Armani, Gucci, Versace, Bocelli, the Italian Opera, the statue of David, and the Sistine Chapel all featured behind LaFerrari...

Coincidentally, we have seen 3 introductions of major supercars this Spring (and that's without counting the new Porsche GT3): 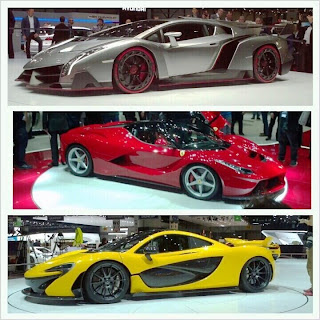 This is some tough competition for a small market of buyers sufficiently wealthy to afford one of these automotive marvels. We are speculating that this is how Lamborghini feels about LaFerrari: 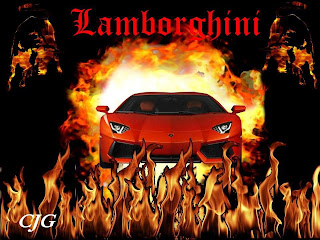 And McLaren would have preferred LaFerrari to be named P2, as in Position 2, since in their mind, McLaren always takes P1 and Ferrari ends up in P2...
Posted by CT at 12:00 PM