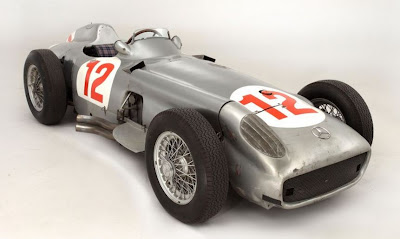 Juan Manuel Fangio is regarded by many as one of the greatest Formula One drivers of all time. He is a 5-time F1 champion, a record that stood for nearly 50 years until it was surpassed by Michael Schumacher. Fangio still holds some incredible records, most of which are not likely to EVER be beaten:

And now Fangio holds the record for the driver of most expensive car ever sold at an auction: his 1954 Grand Prix-winning Mercedes-Benz W196R, which just sold for record $29.65 million. Not only was the car driven to two race wins during Fangio's second Formula One championship that year, it is the only W196 in private hands. This is a truly amazing race car and hopefully it went to an owner that will drive it every once in a while. If they are reading this, I'd like to remind them that we are always ready to help with that kind of work.
Posted by CT at 8:10 PM