Hey James Allen, How About a Real Explanation? 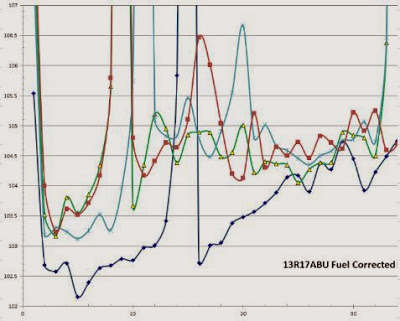 So everyone is wondering how Vettel's race pace can be so much faster than anyone else's in Formula 1, including teammate Mark Webber driving an identical car. Even James Allen is trying to grab some attention on his site with a headline like Analysis: How Does Sebastian Vettel Find the Speed?

Vettel has found a way in terms of balancing and driving his car, to extract close to the maximum consistently in qualifying, but then to push hard on heavy fuel at the start at the same time as maintaining the life of the tyres over a longer period. It’s about not sliding the tyres too much, being precise with the steering in those sub 130km/h corners, being precise with the throttle on corner exit to avoid wheelspin which also overheats the tyres.

So this is it then, just being precise with the steering and preserving the tires?! I bet every driver (well, except for Hamilton perhaps) takes good care of their tires. Why is a super smooth driver like Jenson Button not the fastest then? An entire article devoted to how Vettel does it and this is the only meaningful "insight"? I really expected more from James Allen. Much more: Does Vettel lean on the fronts? Does he compress the braking zone? Does he get on the throttle early but more gradually? Just throwing a time chart like that doesn't explain how he does it and an F1 insider like James Allen should know that very well.

11/8/2013 UPDATE
Peter Windsor breaks it down further for us. In the end, so much of it is about what we always tell first-time autocrossers: "Look Ahead!"
Posted by CT at 9:00 PM