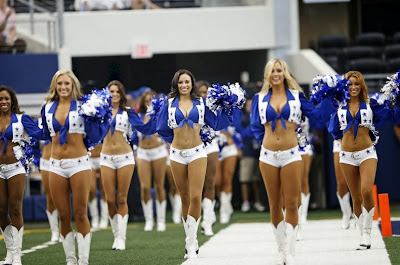 Most interesting part of the 2013 US Grand Prix?
The Dallas Cowboys cheerleaders of course!

There were 135k spectators total over the 3-day weekend. The Circuit of the Americas' total capacity is 120k and most of the grandstands looked far from sold out. The customary fan celebration on the front straight after the race looked very tame compared to Montreal and especially Monza.

Loved watching Jay Leno in the McLaren P1 around the track. He was not especially fast but he makes up for it by being funny as always. That was a thinly veiled ad by the way -- admit it, Jay, even you could not turn down an offer to drive a P1 around COTA! Is it a coincidence that the Forza 5 ads looked like a McLaren infomercial as well? I think not - that's McLaren's PR machine hard at work. In a season where they've had one of their worst showings in their storied history, they'll need all the PR they can get!

Leigh Diffey in the Vettel interview: "How do you stay so humble and grounded?" What a joke, Leigh -- you cannot possibly be forgetting that Vettel is a selfish whiner who's been a total ass on a few occasions even to teammate Mark Webber. You should be ashamed of yourself for asking a question like that just to kiss up to him.

Loved Sam Posey's narration - Vettel is like Senna and Schumacher who "... all believe that destiny called for them and them alone to win!" That's more like it, Diffey.

Hey Will Buxton - I cannot wait for Movember to be over! You look just like Tom Buchanan from the Great Gatsby. You are 90 years late to the party.

We learned that a set of carbon brakes for an F1 car costs 15k - not bad, that's a bargain compared to the ceramic brakes in a Porsche GT3!!

Second-tier Hollywood stars are now beginning to turn up at the race. As Jeremy Clarkson tweeted last time, "I'm very much enjoying the baffled look on many faces in the crowd at Austin."

TV coverage was all about Vettel. As expected, he took an 8th consecutive win. The race was a total snoozefest - I bet the TV ratings would have been much higher if NBC showed the Dallas Cowboys cheerleaders' practice for two hours instead. Party on, Austin! I'd rather spend the $250 on 6-th Street instead of general admission to this year's race...
Posted by CT at 9:10 PM