To Err on The Side of Error - Part I

As hard as we try, we don't always get it right. Yes, automotive journalists in general are fairly astute individuals. We read newspapers. We study trends. A lot of times we even scribble notes at events in order to remember things. All of this comes in handy when our job calls upon us to use this insight and cast a prediction of the auto industry. A good amount of time, we hit the nail right on the head. Other times? Well, that's what this article is for.

Predictions regarding the automobile industry have been around since the beginning of the automobile. News on new technology was, and always has been, a hot topic of automotive discussion. The ability to stay ahead of the competition is similar to a war tactic: predict the guy's next move and beat him to it. What we are going to discuss here is the ability to get things completely wrong. Astonishingly so. 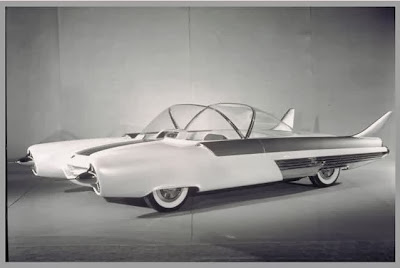 The 1954 Ford Atmos used hand grips for steering,
it had a radar screen, and the driver sat in the middle.

For the most part (sadly), safety is one of the things that comes from governmental regulations. While most manufacturers had innovative safety programs, it was government mandates that made items standard, such as a three point seatbelt, airbags, and traction control. Of my research in this, airbags stood out due to the consumer's stubbornness to accept them. These little balloons of safety have been responsible for saving untold numbers of lives, but there were growing pains associated with their public acceptance.

Road & Track had an extremely in-depth look at airbags in its May 1979 issue. Being the automotive authority they are, one would think they could foresee the benefits and merits we see now today. That's not so. Their language in particular was quite alarming as to how wrong we can sometimes be;

"R&T finds the airbag mandate to be a gamble at best, and at worst a formula for disaster for the nation's highway safety objectives"

They didn't just stop there. They even included a publisher-paid postcard that could be sent to Washington D.C. (including a 2nd card that could be passed along "to a concerned friend"). Of the 7-page article, there were maybe two or three small parts were they reported slightly positive news in that airbag inflation didn't harpoon cigarettes into one's throat, or harm those who wear eyeglasses.

What's more interesting to look back on is the technology thought to propel our cars forward in the future. In the late 50's, Paxton (our beloved manufacturer of superchargers) attempted to build a steam car called the Phoenix. Road & Tracks article on this was somewhat limited in scope due to the car being non-driveable. The power-plant its-self was the highlight of course, seeing as steam was not widely used in the automobile since the beginning of the century. The engine, a 6piston, 3 cyl, dual crankshaft unit had only seen dyno time and never was put in the car. Development hadn't come along quite enough to make it a reality, and the whole project was ultimately scrapped.

In R&T's January 1967 issue, they touched on the electric car, and also spoke words that resonate true nearly 47 years later.

"...any new power source must offer some advantages over the old while matching the old in most characteristics."

Clearly, seeing the same issues over and over is not new. We haven't just started playing with the electric car, in fact we've been at it for quite some time. One of the things we have been able to overcome in terms of similarities to gasoline engine is power. The Tesla Model S scurries to 60mph from a standstill at a remarkable 5.1 seconds. But two big problems remain: range, and charging time.

In the 1967 issue, they did cover range. To describe it as "optimistic" is a bit of an understatement. Research was submitted by Dr George Hoffman, a research engineer at the University of California. Unfortunately, all of his templates for range were for a car who's battery weight was equal to nearly fifty-percent (!) of the car's total weight. The batteries proposed were of the metal-air type, and understandably little was mentioned on how they would be re-charged, or how long it would take.

Tesla's website has "over 300 miles" touted, but there's some small print that needs to be read. This range is under ideal circumstances, at 55mph, with the bigger 85kw motor, in 70 degree temps, with no a/c... you can see where this is going.

Now, lets take another look at this. Most electric cars are usually geared for people who live in the city and don't have to travel far. So you live in Chicago, you fell for Tesla's as-advertised price, it's winter and 32 degrees out, and you work 'banker's hours'. Well, if you factor in the advertised monthly price (with the smaller power package), the probability that you enjoy staying warm, and that it's dark out, your 300-mile range is now only 160 miles... Technically speaking, your range has been cut in half before you even open up the door. 160 miles is still impressive, no doubt. In fact, it's likely more than you'll need on any given commute to and from work. When it comes to charging, you'll have to adopt a certain mentality: charge early, charge often.

Recharging is great when you have a 220/240v outlet available, but most common households only have these where a washer/dryer plugs into. Apartments in the city (which is generally where you'd think these cars are aimed) have an assigned patch of concrete for you to park on, but otherwise have little to no support for plug-in vehicles. At time of writing, there's a grand total of 4 public charging stations in the Chicago metropolitan area. I was unable to find any apartment parking areas designated as being friendly to EV's.

To be fair, loose infrastructure is an issue with most alternative fuels, so let's not condemn the electric car. What does need to be noted as the biggest concern is the time the car spends immobile, leashed to an electrical outlet. Again, using Tesla's website, I dialed in a 40 mile range per day, with a 110v outlet to plug into. My charge time was over 12 hours. Albeit, if equipped with a 220v outlet this time is shortened, but still timed in hours rather than minutes.

So is it possible we are completely wrong about the electric car, such as we were with airbags? It is quite possible. We've come quite a long way but are drawing nearly the same conclusions as we did several decades ago. To that end, that means we'll have to look elsewhere, and I know where I'd look. CNG.

To be continued. . .
Contributed by Patrick Morgan

Patrick Morgan is a Chief Driving Instructor for the Chicago Region SCCA. See more of his writing at www.onetrakmind.wordpress.com. He is a lifetime veteran of all things automobiles and is currently managing driver development for international racing sanctions. Patrick can be reached for questions at trackoutmultimedia@gmail.com. Follow him on twitter @pmorganracing.
Posted by Unknown at 1:00 AM