Ezra Dyer of Automobile magazine and The New York Times' Wheels blog is possibly the most original, genuine, and funny automotive writer today. He has won nearly every automotive journalism trophy there is, including the Nobel Peace Prize in 2006, when a Korean translation of his Dyre Consequences column caused Kim Jong Il to laugh so hard that he renounced Communism. His recent attempt to sell the The Finest Wheels Ever Made By Humankind on Craigslist make him the leading contender in the Steel Wheels category of the 2013 Pulitzer prize. Here's why: 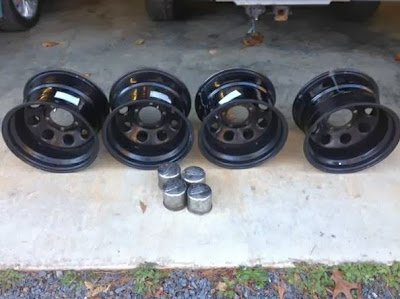 I have for sale four steel wheels and chrome center caps. They are 15 inches in diameter and 10 inches wide. Their circumference (15 x pi) is 47.142 inches, so you should be able to go to any tire store and say, "What'ya got in 47.142 circumference?" There are plenty of tires in that size, but these wheels were most recently fitted with a set of 31 x 10.50 SharkClaw Terrain Molesters. I can't speak to the compatibility of anything else.

This type of wheel is colloquially known as a "steelie," but you can call these stealies. Because at this price, what I'm offering you is tantamount to larceny. And not the petty kind. This is grand theft. Black steel wheels in this size usually sell for $60 to $80 each, and I'm asking $80 for all four.

Why, you ask? Well, the Buddhists have a word called "nekkhamma" that loosely translates as, "renunciation"--the forgoing of that which incites lust and therefore impedes enlightenment. I'm not into that. It just happens to be your good fortune that I need $80 to put toward the calf implant I have on layaway. Right now I've just got the left one and I walk in big circles.

The brand of these wheels has been lost to antiquity. The center caps, though, are embossed with the word "Redline". For the uninitiated, the Red Line is a subway line in Boston that runs from Alewife station in Cambridge to either Braintree or Ashmont at its southern terminus. I can thus deduce that these center caps were originally used on Red Line trains but were removed because they caused the trains to go so fast that cresting a small rise would cause passengers to float around the cars, as on a space plane. Requiring every MBTA passenger to wear a full G-suit was deemed impractical and the center caps were removed and sent to Lockheed Martin for use on the SR-71 Blackbird's landing gear. After the SR-71 was retired, the timeline gets murky, but eventually the center caps found their way to the only other pieces of equipment worthy of their performance provenance: the black steel wheels.

Each wheel bears a "Made in the USA" sticker. Forged in the belching foundries of darkest Pittsburgh, these wheels were hammered into form by taciturn, sooty-faced craftsmen whose gnarled hands reshaped ore first hewn from the rugged fjords of Scandinavia by murderous Vikings.

They were too wide for my Bronco.

I will not ship these wheels to North Korea, for matters of national security. Given the current tensions in the South China Sea, I probably have to rule out China as well. I daresay we cannot allow this metallurgy to escape our borders, lest the Bolsheviks get their hands on it and subsequently fashion great ironclad seagoing menaces to threaten our shipping lanes and undermine international commerce.

Each wheel has five bolt holes in a pattern commonly used by the Ford Motor Company. These holes are surrounded by a concentric ring of eight larger holes whose particular purpose is not immediately evident. Scholars continue to debate their meaning, but it's possible that each one signifies a chamber of the Wu Tang. It's also within the realm of reason that without the holes these wheels would be wicked heavy.

The existence of these wheels was foretold by the Rolling Stones' 1989 album "Steel Wheels". Mick Jagger has said that every song on that album is about these wheels, especially the tracks "Terrifying" and "Hold Onto Your Hat."

You don't mount tires on these wheels. These wheels mount your tires.

I'd prefer the wheels to go to a fellow Ford owner, but I will consider selling the set to the International Olympic Committee (IOC) if it agrees to consider my petition to ratify "Strongman Wheel-Throwin'" as an officially sanctioned event at the 2016 Rio games.

I'd like to get cash, but I will consider partial trades for giant pumpkins (800+ pounds), Thomas Kinkade artwork, gift certificates to Service Merchandise, antique clogs and unopened Designer Imposter colognes.

If this ad has been live for more than 20 seconds, you're probably too late and I feel bad for you. But if you are keen of spirit and fleet of e-mail, you may just become the next owner of the steeliest wheels the world has yet, or will ever, know. Godspeed.

12 hours after posting the ad on Craigslist, Ezra admitted that amazingly, the wheels have not yet sold... Encouraged by this news, OneHotLap fans have started assembling the finest collection of unopened Designer Imposter colognes in hopes of stealing the steeliest wheels the world will ever know!
Posted by CT at 11:30 PM