The Legend of The Upside-Down Flagger 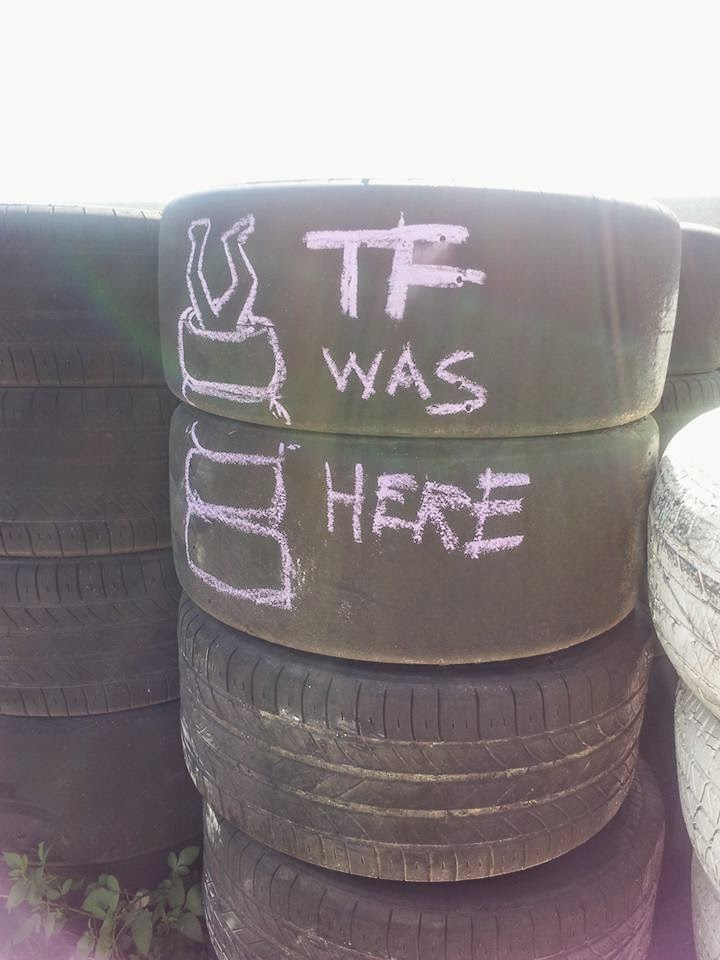 Have you heard the one about the Sebring 12 Hour Corner Marshal who tried to retrieve equipment
which fell into a tire stack and ended up inverted... and well, truly 'stuck'? Quick action on the part of his co-worker (enabling him to breathe by holding his legs upright) until a rescue team arrived, made this merely an embarrassing but amusing incident. It occurred just past the halfway point and resulted in the longest safety car period (7 laps) of the 2006 Sebring 12 race.

Turn 10: Control, 10, yellow
Control: Go 10
10: We have a worker in the tire wall
Control: Tell him to get back behind the wall
10: We can't - he's stuck upside down in the tire wall.
Control: Full Course Yellow

Here's the back story --

The same core group of flaggers work Turn 10 at Sebring's 12 Hour race each year. They are a colorful bunch, mostly from the Northeast area, and have worked together for years. They have a bit of a reputation for shenanigans, and even the racers are somewhat aware of this rep. Back in 2006, the Turn 10 crew is in action during the race. Being a 12 hour race, they have several shifts of flaggers that get switched out every hour or two. So one of the flaggers, we'll call him "TF", is making his way back to his station, and is attempting to crawl or walk over some tire wall. His scanner, typically clipped on a flagger's belt, falls off and down inside one of the tire bundles. "TF" attempts to reach down into the tire bundle and quickly grab the scanner. However, his grip on the tire bundle slips, and he ends up falling head first into the tire bundle. Ever try to get out of a stack of tires when you're wedged head first beyond your shoulders? Your arms are locked to your sides and you ain't going anywhere. Well, this is where "TF" found himself. The race group was under a local yellow, and there was a natural gap where it was safe to quickly swap out a worker.

Well, one of TF's fellow flaggers goes out and tries to help TF out, but he's stuck good and he can't get TF out. Eventually they have to call it in before racing gets going back to full boil. Control hears the call of a worker is stuck in the tire bundle, but they can't correctly interpret the issue initially. Eventually Control gets the idea of what's going on, and the decision is they need to send the safety crew to the scene. This caused a FCY while the Safety Crew now responded and attempted to get TF out. Imagine the broadcast crew trying to explain this one. They may have actually mentioned the reason on TV.

Of course, the crowd that hangs out at Turn 10 is famously rowdy and apparently a legend among the Sebring 12 Hour fans in and of themselves. Even the Safety Crew guys are getting a good chuckle out of the incident. One of them developed a new hand signal that flaggers in the Northeast joke about: take your index and middle fingers and make a peace sign. Take your other hand and wrap your fingers around the fingers not part of the peace sign on your other hand, like a stack of tires. Now wiggle your peace sign fingers = legs wiggling in the air in a stack of tires. 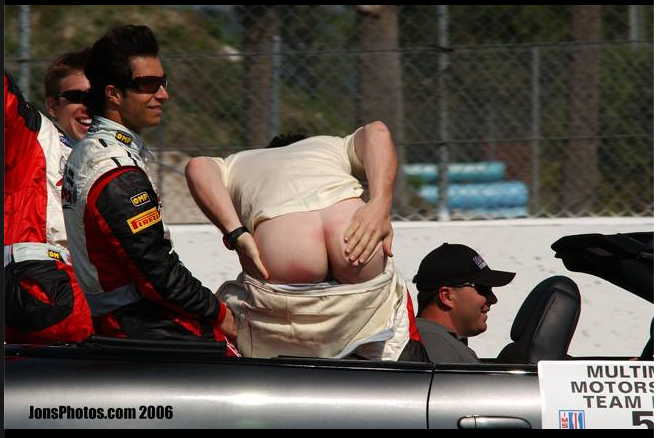 Apparently there's a side story in this Sebring race. Driver Gunnar Jeanette decided to play to the rowdy Turn 10 fans during the parade laps earlier in the day for driver introductions and decided to moon the Turn 10 fans. The IMSA sanctioning body was none too pleased with his shenanigans, and according to one of the flaggers telling the TF story, Gunnar was fined $10K. That by itself would have been the big story to remember for the race... if it weren't for the Legend of The Upside-Down Flagger...

TF did not handle this incident well. Later in the season, someone decided to make a cake for his birthday and present it to him at Lime Rock. The cake featured... a figure upside down in a small tire bundle. Well, the flaggers in attendance thought it was a hoot, but apparently TF saw it and turned right around and left, and his wife, a fellow flagger, also was steamed and left in a huff. Supposedly they didn't return to work an event for 2 full years! And that's a shame because people who have worked with TF and his wife say they are both excellent flaggers.

There's a bit more to the story (isn't there always?).

According to the 'official' report, the trapped marshal stated that he went 'tire diving' because he had dropped his radio scanner into the stack.

As related in a follow-up briefing on the incident by the marshal-colleague who first responded on scene however, the following was reported:

2. When initially bending down to retrieve the pen, his credential (SCCA hard card) broke free from its tether and also fell in (raising the stakes significantly!).

3. Now truly motivated, the marshal more aggressively wiggled himself further in, in the forlorn attempt to reach the ground inside the stack where the pen AND credential now rested, ultimately tipping himself in, and upside down with one arm extended into the stack trying to grasp the lost items, and his other pinned tightly at his side and behind him. (all this while the top competitors negotiated the turn at ~130 mph).

4. The first responder-marshal was about 100 yds away on the same side of the course when the incident first developed, and looking up track, away from his mate. He was finally signaled by the cross-track corner captain ('Observer' to those elsewhere), and his attention drawn to the plight of the 'stuck marshal' - it was later estimated at about 2 minutes between the incident time and when the would-be rescuer reached the scene.

5. Upon his arrival, the rescuer reported that he heard 'intense but muffled mumbling' from within the tire wall (apparently loud enough to be heard OVER race engine noise!), and found the precise location due the violent 'peddling' of the 'trapee's' legs in the air. 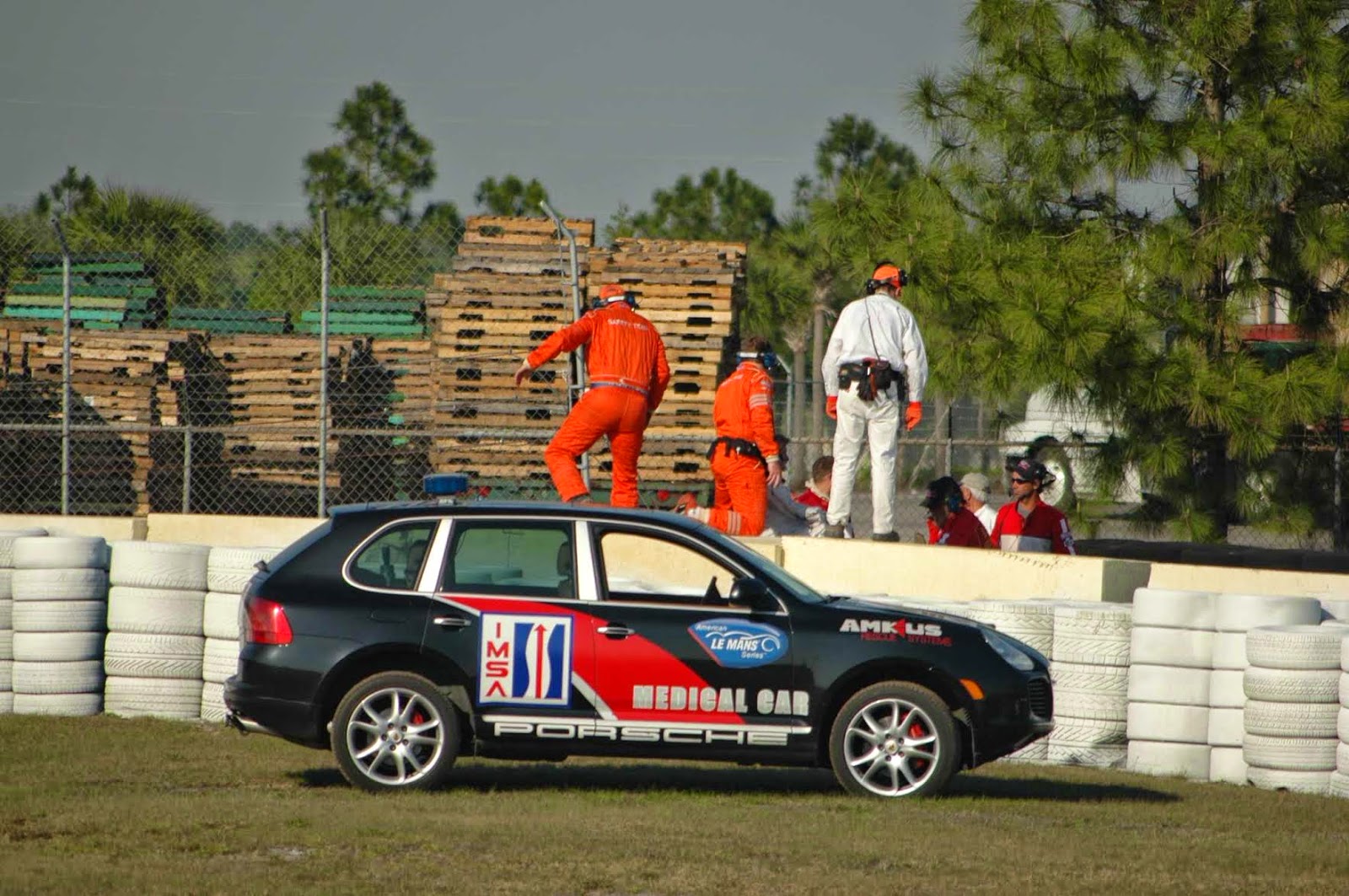 How many rescue workers does it take to extract one upside down flagger from a tire?

6. It was immediately realized that the victim's stomach had effectively sealed him into the tire stack, and he was therefore deprived of oxygen. One can imagine it was rather dark in there too, not to mention thoughts of the sorts of creepy stuff which might dwell inside.

7. Picture this: According to the account, the rescuer climbed on top of the tire stack and placed the victims ankles on his shoulders, and pulled on the victims belt in an initial vain attempt to extract him, but he succeed only in slipping off the victims trousers (another point in favor of coveralls?).

8. At this point, the rescuing marshal realized that he was not equal to the task of effecting a rescue single-handed, but was able to 'break the seal' of the victims belly around the top tire, thereby admitting at least some fresh air to the invertee's 'Tire Chamber'.

9. The victim and responding marshal remained in this position until Emergency Vehicles arrived on scene, a period of several more minutes. 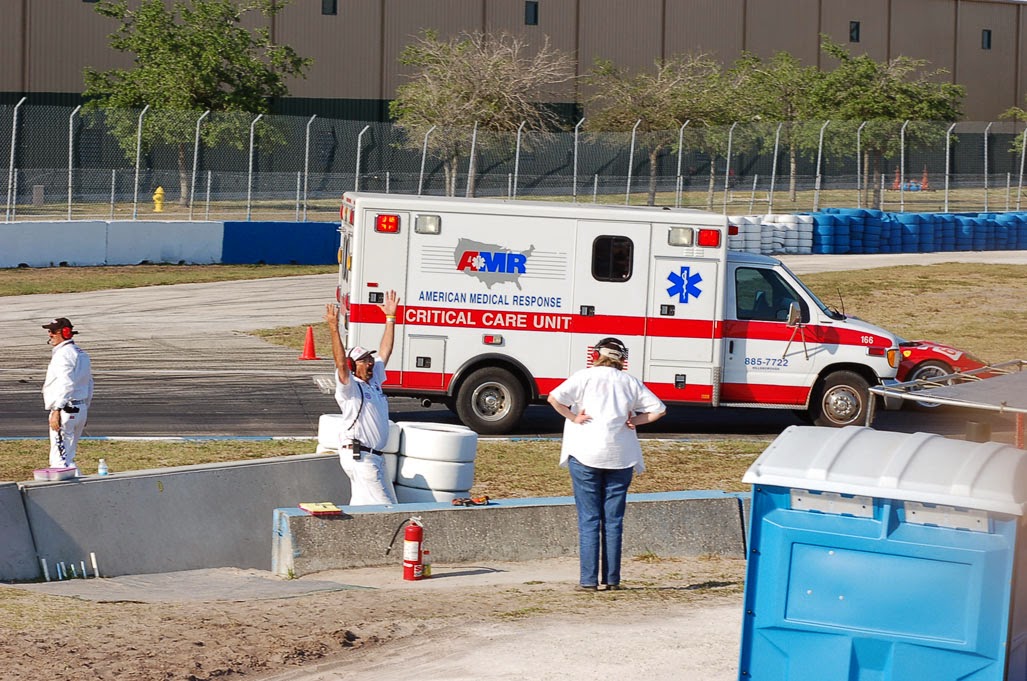 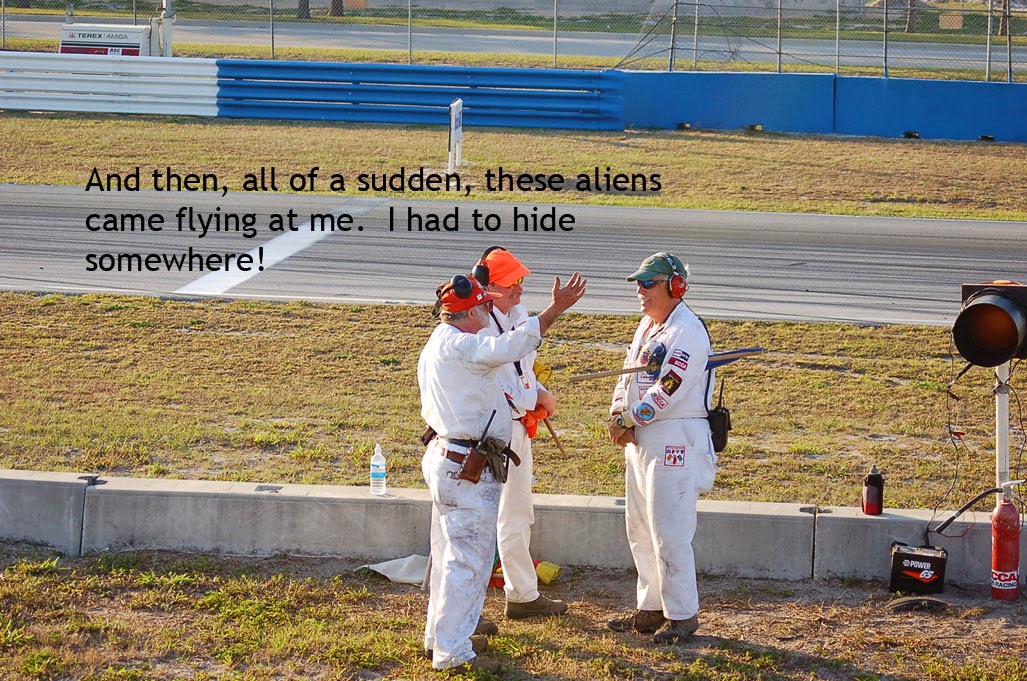 From a Turn 10 insider: Turn 10 (the incident location) at Sebring has a very strong group of spirited spectators from around the world who have camped together for years, and set up a temporary community. In fact, the previous night, several of us accepted an invitation from the denizens of Turn 10 to attend their annual slide show, which was a real treat - many pictures of last year's event... plenty of good beer, and attractive women, one of whom found it useful to announce the show's intermission by standing in front of the screen and exposing her (well-proportioned) bare chest - I did mention that the Turn 10 group was 'spirited', didn't I? 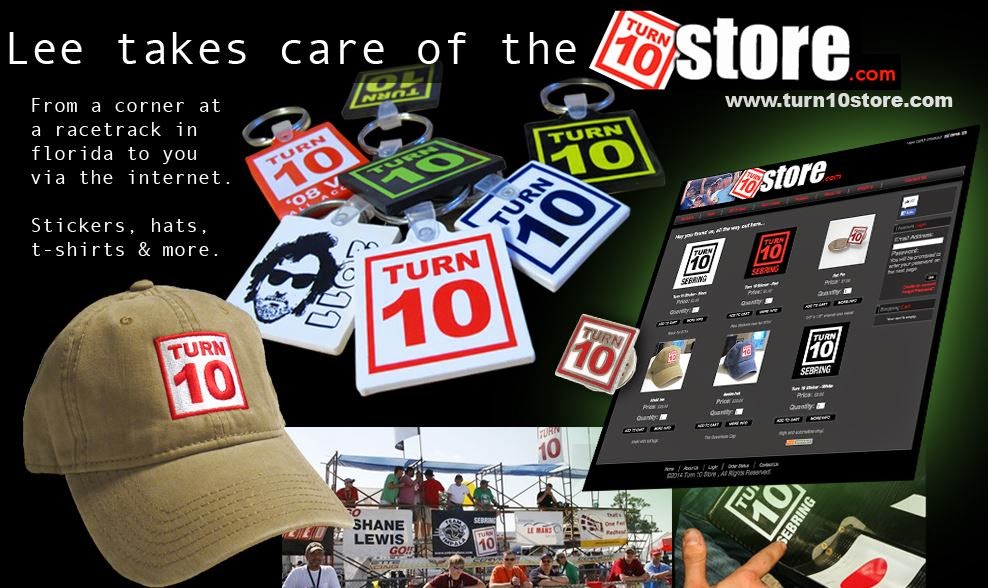